Singer 404 and a Holiday Tablecloth

If you start with Singer’s 301 gear-driven machine, make it extra durable, extra sturdy, extra powerful, and add a drop-in bobbin, you end up with Singer’s 404 model! It’s straight-stitch only (but what a straight stitch!) and can sew through pretty much anything.

Best of all is the drop-in bobbin — it’s a breeze to handle. The 301 model’s bobbin really isn’t all that bad, but the drop-in in the 404 is so much easier to use! I still use my 301 (lightweight and portable), but the 404 gets the bulk of the playing time now.

Don’t think of this as an updated “Featherweight”, though. It’s built like a tank — and it’s about as heavy as one, too. No way is this a portable machine. It sews well sitting on top of a table, so you don’t have to mount it in a sewing table, though. 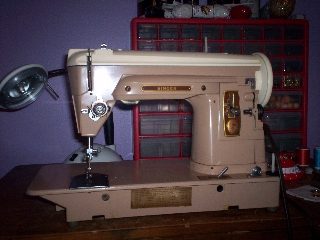 If the bobbin’s not in the machine (the 404 uses standard Singer 66 type bobbins), you’ll see an empty circular depression slightly to the left of and in front of the needle. That’s where the bobbin goes — no case to worry about. Just load up the bobbin and drop it in (as in “drop-in bobbin”) 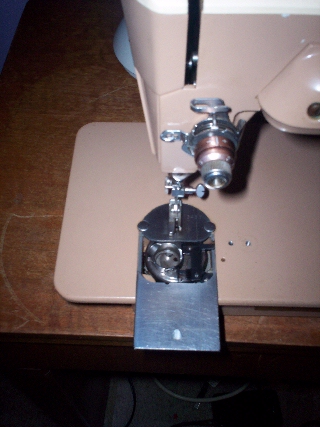 You wind the bobbin pretty much the same way as you might on the 221 or the 301. The mechanism is on the right front side of the machine just in front of the handwheel. Just lip the winder up and insert the empty bobbin. There’s a thread spool pin and a thread guide especially meant for bobbin winding just below the winder.

If you turn the silver inner-wheel in the middle of the handwheel, you’ll disconnect the needlebar and can wind the bobbin without the needle moving. As the bobbin fills, it will start turning slower (since a full bobbin will rub against the “hump” on the side of the machine where the winding bobbin sits. When you see it slowing, let off the foot pedal, remove the bobbin, flip the winder down, and tighten the silver inner wheel on the handwheel to re-engage the needlebar. 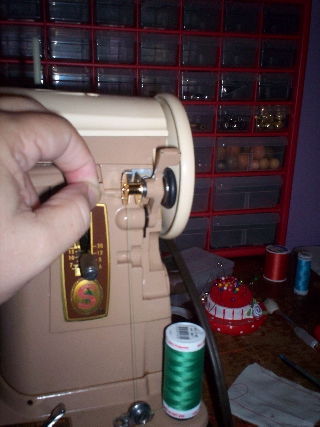 Take your full bobbin and “drop” it into the circular depression in the bobbin mechanism. Some folks have said they have trouble removing the bobbin — I haven’t had this problem. There’s a little notch to slip your finger into to make it easy to grab the bobbin — it’s similar to the notch on a CD case that helps you grab the edge of a CD. 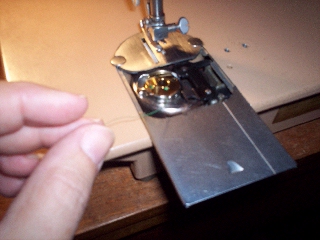 Routing the thread is pretty simple. There’s an angled slot right in front of the bobbin; drag the thread to the front, then pull it right, then left … and it will slide down the angled slot. Drag it to the left most side and you’ll see there’s a small “spring” with a lip. Slip the thread under the spring (my fumblefingers have a little trouble with this — I sometimes have to use a pin to pull the spring out so I can route the thread behind it.

I’m sure there’s an easy trick to do this, but I don’t know it!

When you’re done, pull the thread so that it passes from under this spring and over the bobbin heading towards a “2:00 o’clock” position. 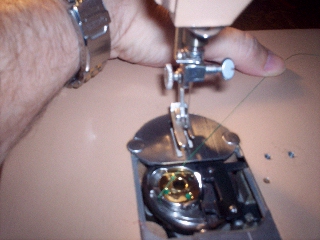 Voila! The bobbin is loaded, threaded, and ready for action! 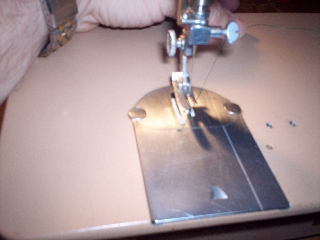 This is a simple, powerful, and sturdy machine. It’s not fancy — straight-stitch only. Beautiful, beautiful, straight-stitches. There’s a “301”-type stitch length adjusting arm on the front of the machine next to the bobbin winder. Lift it upwards and the machine sews in reverse.

The lever at the bottom of the image drops the feed dogs — I like the convenience of the lever. 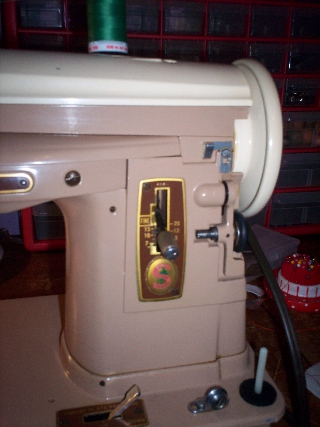 The machine’s pretty easy to thread. You can check this threading diagram, or you can give it a go on your own. Mount the thread spool on the upright thread pin. If you following the “usual suspects” across the top and down to the upper-tension wheel, you’ll be spot on. 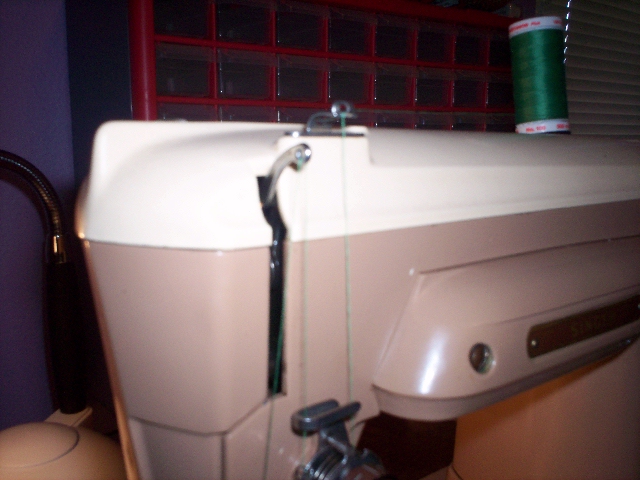 Continuing on the “usual suspects” theme … you won’t find any surprises here. When you’re done, run the thread underneath the foot. I then turn the handwheel until the needle goes down, then back up to the topmost position. Raise the foot and gently pull the upper thread. You’ll see it pull up a loop of bobbin thread. I then pull out the bobbin thread until I have two tails of thread (top and bottom). You’re now ready to sew — I like to hold on the the two tails until the first stitch is made.

Just in case you’re not quite sure about the threading … 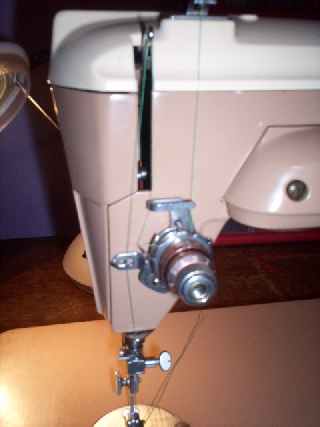 … you can pop open the door in the left-hand side of the machine for a threading diagram! Makes it really easy to oil the right spots, too … when you get to oiling!

The door just swings open — no screws to fiddle width. Snap it shut and a tensioning catch will keep it from swinging open on it’s own. 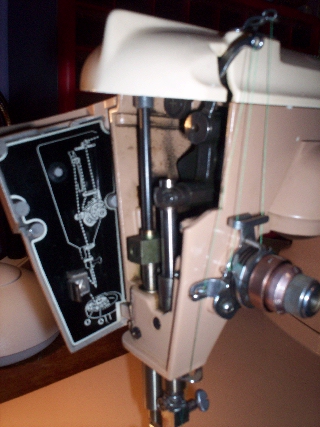 On to the holiday tablecloth! 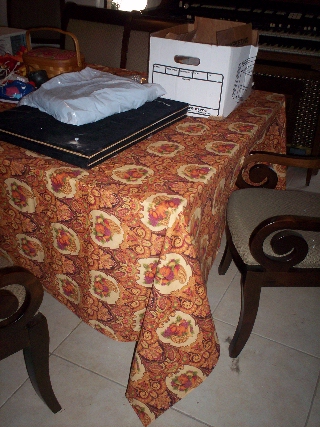