If you were to start a sewing machine Hall of Fame, the first few inductees might include the Singer 221 Featherweight and perhaps a Singer 201, but would definately include a Bernina 830.

This industry and sewing proven machine has a large and dedicated following … and more and more sewists want to join the 830 club. As a result, even though more than a million units were produced from 1972 through 1977, it’s probably more in demand today than it ever has been.

Prices unfortunately reflect this — expect to pay between $350 and $800 for a good used machine! I got really lucky with this Ebay find for only $150 — I don’t know if no one was paying attention that day or not, but I wouldn’t expect it to happen again!

The Bernina 830 is one of those rare and happy mechanical occurences where the manufacturer simply got everything right (kind of like a 1957 Chevrolet!). These metal and mechanical marvels purr along as smoothly today as when they first left the dealer showroom.

The manuals are long out of print — although copies are easily found on the Internet. Here’s a guide on cleaning and oiling. You can also download copies of the manuals for most older mechanical models from Bernina. The 830 manual was missing for a long time, but they’ve recently added it (and many others) to the list.

Curious about what 830’s are available on Ebay right now? Just click the line below to find out! 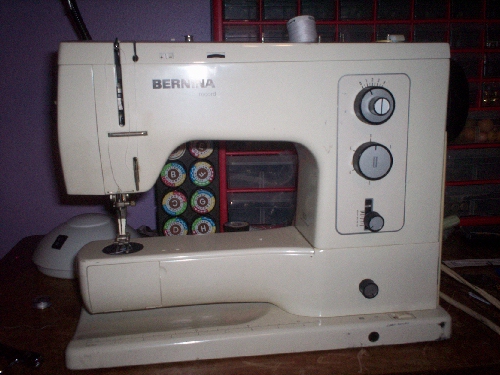 Let’s take a look at the controls. The 830 is a mechanical machine — no computers. It offers 21 stitches — with 15 of them being decorative. It has 5 different needle positions and you can vary the stitch width and length up to 4mm. You’ve also got a Five Step Buttonhole; this is the same as a four step buttonhole, with a fifth straight securing stitch down one side of the buttonhole stitching.

The top dial controls the stitch width. The next dial down has five stops and controls your five step buttonhole. The next arm down controls stitch length — pressing it all the way up gives you reverse stitching. There’s a “bar” marked near the 1mm stitch length — it’s the suggested length setting when you use the decorative stitches.

Underneath the stitch length arm is a switch that engages or disengages the feed dogs. The switch underneath and slightly to the right controls a “slow speed/high torque” setting that gives you extra control and extra power when you need it.

Finally, there’s a socket that accepts Bernina’s foot lift arm. Press it with your knee to raise the sewing foot (you can also raise it manually with the standard lift arm behind the sewing head.).

To really use the lift arm properly, you should use your left foot to press on the foot control! This takes a tiny bit of getting-used-to, but is nice once you do so. 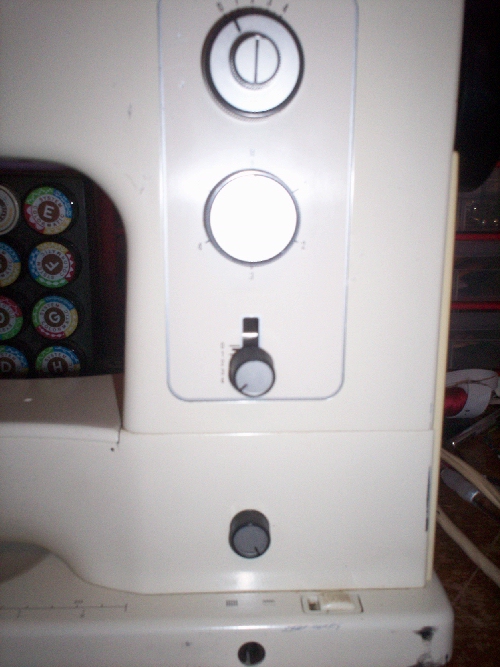 View from the left side — note the on/off switch for the sewing light. Turning the machine on doesn’t automatically turn on the light — I like this.

The 830 is a free arm machine — although there is a sewing “table” that slides and locks onto the free arm.

The Bernina 830 uses “old style” Bernina feet — these are bayonet mount feet that pop on and off incredibly easily (that’s what sold me on my first Bernina). The old style is a little shorter than the “new” style (essentially the same thing except a little higher). I believe you could use old style feet on any model up through the 1630.

Once you join the Bernina club, you often find yourself in constant foot search mode! There are dozens and dozens of feet — but you can get by with only a few. Standard feet on an original 830 include Zigzag, Embroidery, Overlock, Blindstitch, Buttonhole, Small Darning, Tailor tacking, Hemmer 4mm, Pintuck (7-groove), Lap Hemmer, Zipper, and the low Shank Adaptor.

Bernina “Old Style” feet are readily available. List price tends to be $20 to $30 per foot; used feet may only be a few dollars on Ebay. 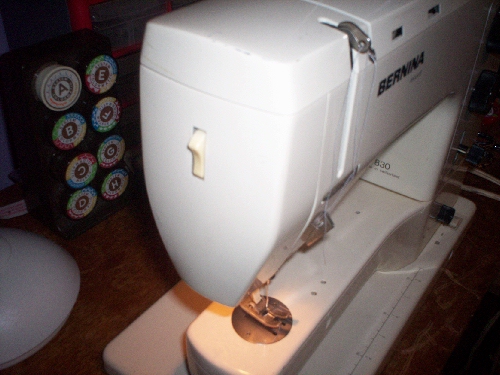 The standard Bernina bobbin setup. Works like every other Bernina I’ve used. There is a slight difference — and here’s what I meant about “Bernina got everything right with the 830”. Every other Bernina I’ve owned has occasionally experienced bobbin wierdness — jams, nests, thread breaking, etc. Maybe that’s just because of the user (me!) — but I’ve never never never had any trouble with the bobbin on the 830. It operates smooth and trouble-free. 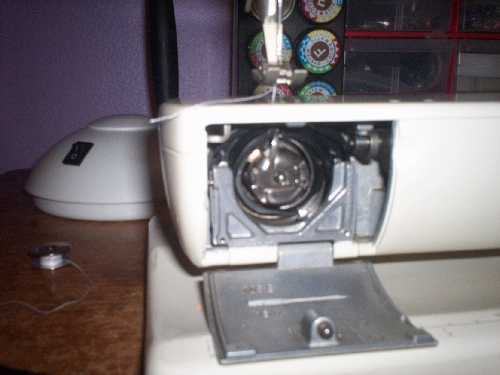 Top view — the right-most arm selects either straight-stitch mode (which gives you straight and zig-zag) or decorative stitch mode.

By the way, my camera washed out most of these stitches — there’s another photo later on where they’re a little clearer. 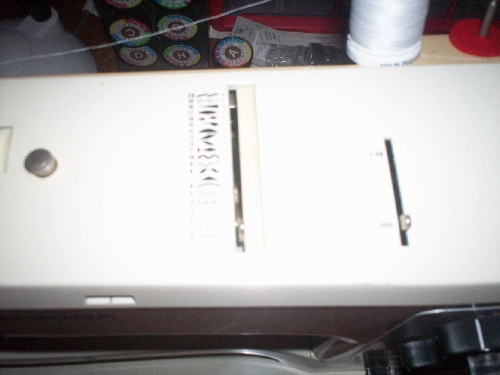 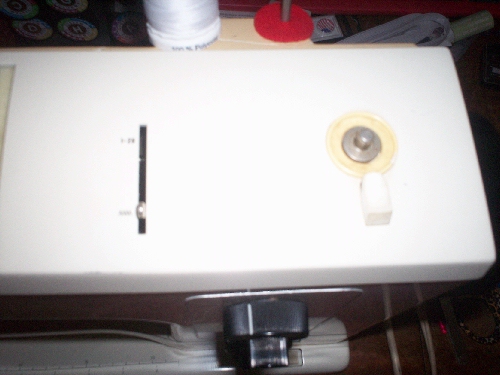 Here’s a view from the left top. Note the bobbin post to the left of the decorative stitch arm. When you’re winding the bobbin, the thread path flows from the thread spool, around this post, then back to the bobbin winder.

You also have a little better view of the decorative stitch selection here. 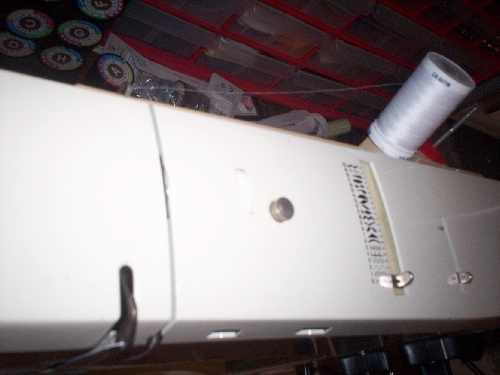 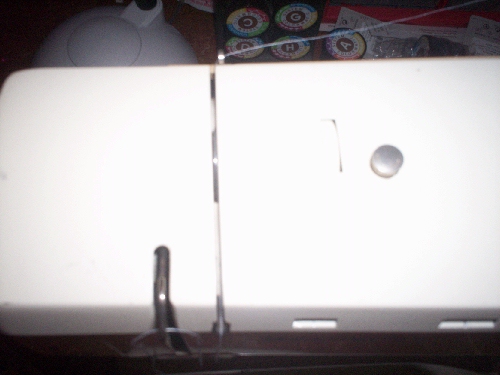 There’s a thread guide directly above the needle you want to pass through. 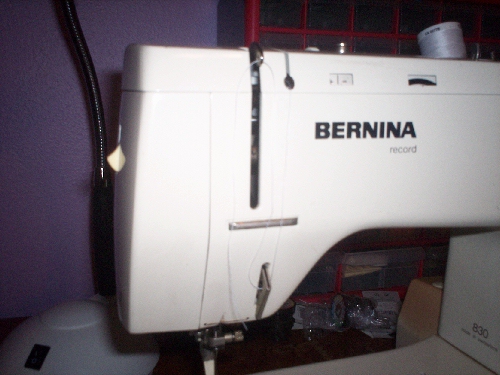 You can see the last thread guide a little better here. You might also note the beautiful straight stitch and some varying zig-zags.

I know a lot of machines claim you can do free-motion embroidery — but this is the first machine where I’ve actually been confident that I could be successful doing so. Might have something to do with the ultra-smooth action. Quiet as a mouse, too. 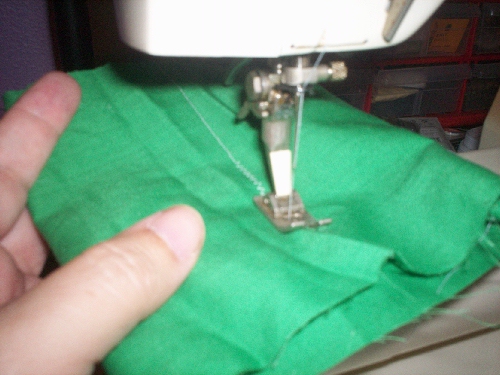