Like I said, it’s cold outside and I couldn’t find my ear warmers, so I decided to make a quicky set from some scrap fleece.

I hope to have some pictures of the warmers in use once my model gets home! (UPDATE: Daughter got home, shanghaied her into modelling. Only cost me one ear warmer!)

I decided I wanted to have a double layer of fleece, not a single layer. This makes things a tiny bit more complex, but it means I can mix colors if I choose!

I can see making these in Purple and Gold for my LSU friends (and myself!) However, since all I had was red, black, and blue, my choices were a little limited. I made a red and blue pair and a red and black pair. Total time? About 10 minutes per pair. 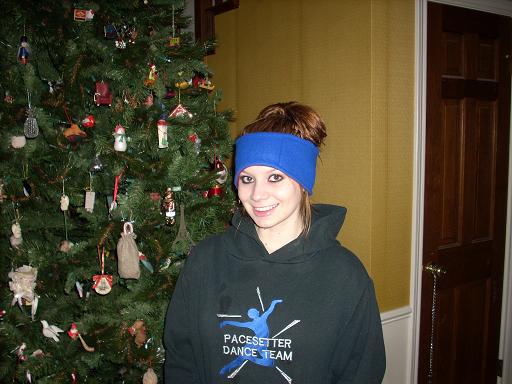 First, a pattern! Find a tape measure and measure the circumference of your head. Pass around the middle of your forehead and just at the top of your ears. We’ll use this number when we draw the pattern.

Take this number, divide it by 2, then subtract 1/4″ inch. For instance, suppose your head measures 23 inches. Divide this by two to get 11 1/2 inches — then substract 1/4 inch from that to yield 11 1/4 inches. This will be the Length for our pattern.

Draw a rectangle Length inches by 4 1/2 inches. Put a little dot at the midpoint of the Length sides.

The end result of all this is that we’ll have dotted “notches” in each corner — each notch being 3/4″ by 1″ in size.

Now, here’s the hard part. (At least, it was hard for artistically challenged me!). You need to freehand draw a curved line from each midpoint side that meets up with the dotted line leading to the end of the rectangle. That’s four curved lines!

It’d be nice if they matched exactly — although the way we cut and sew this, it’s not that important. Still, the closer you can get them to matching, the better it will be.

You can see the results of the curved lines on the pattern to the right. The line is almost a lazy “S” shape — it curves one way from the mid-point, then switches off and curves the other way as it reaches to the edge of the pattern.

Okay, ready for some cutting! Take two pieces of fleece about 6 inches wide by 25 to 27 inches long — you want the length to be twice your Length measurement plus a little extra if you need to cut off selvedges. Make sure your fleece will stretch in the Length direction! (Important!) 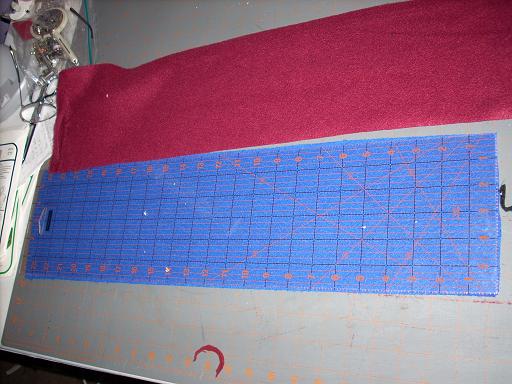 Now, fold each fleece portion in half. Lay the two fleece pieces on top of each other — match the folded side!

Try to make sure that the good side of the fleece is on the same side on both pieces of fleece. I’m using good side instead of right side because one side may be fluffier or fuzzier than the other. Let the most comfortable side the the good side!

I’ve used this pattern a couple of times — it got a little chewed up in the process, but is still usable.

At least, do this the first time you use the pattern. If you then use it again, you’ll already have the seam allowance cut. In that case, it’s okay to cut along the edges of the pattern.

I’ve already used this pattern once — you can see my lines about 1/4 ” inside the cut edges. In this case, I’m going to cut along the edges of the pattern since I’ve already got the seam allowance cut. 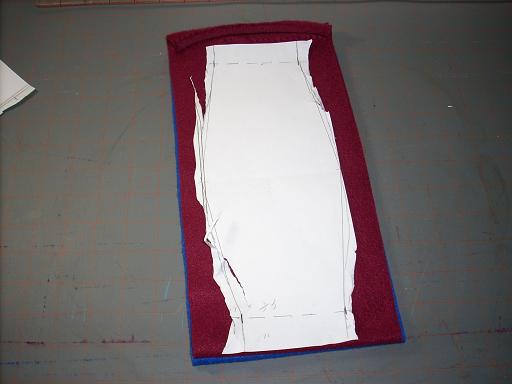 You’re cutting through four layers of soft fleece — I had some problems with the rotary cutter pressing down too far and tearing the pattern a little. Using scissors probably would have made a difference.

In any case, rotary cutters still worked fine for cutting the fleece. I now have two pieces of different colored fleece that I’ll use for the earwarmer.

Note that my curved lines don’t look at all the same. That’s not going to be a problem. 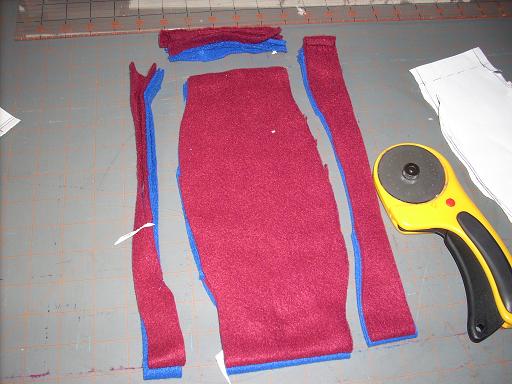 Unfold the two pieces of fleece — they’re in the shape of a really stretched out bowtie.

Match the good sides of fleece together — remember, the good side is the comfortable side — and pin the pieces together. 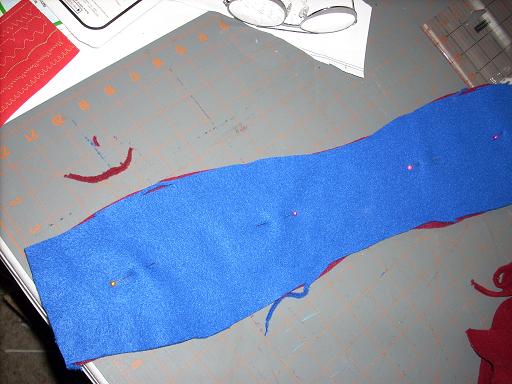 We’re now going to sew along three sides of this bowtie.

Begin at one end and sew along the curved sides of the bowtie. Try and use about a 1/4″ seam allowance. 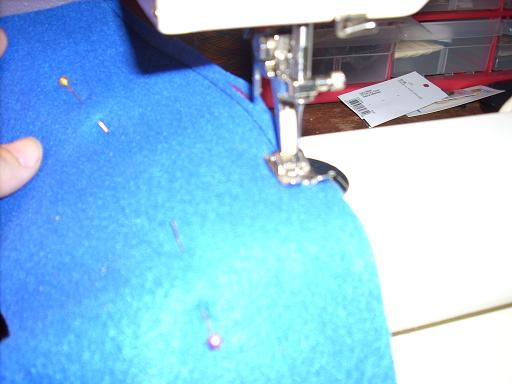 When you get about 1/4″ from the end of the bowtie, stop with the needle in the down position.

Raise the presser foot, then rotate the bowtie 90 degrees.

Lower the presser foot, then sew along one edge of the bowtie. Remember the 1/4″ seam allowance. 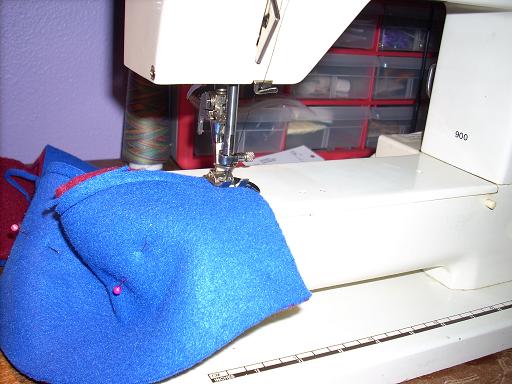 Sew back up along the remaining curved side of the bowtie. Keep the 1/4 ” seam allowance going. Use your fingers to make sure the fleece doesn’t bunch or fold along the way.

When you get to the end, sew all the way to the end of the fleece. We’re not going to close this last side; we’ll leave it open.

At this point, we’ve sewed up three sides of the bowtie. 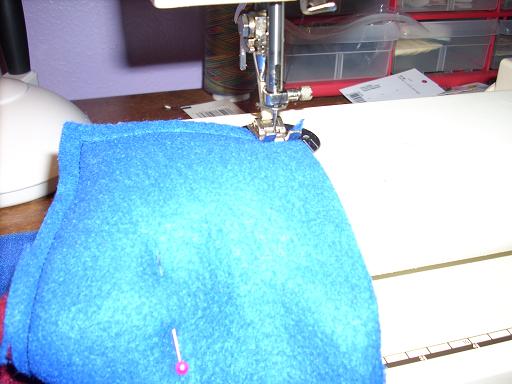 Remove the fleece and lay it flat on your cutting table.

Hmmm … come to think of it, a French Seam would probably look pretty good on this. Will have to try it in a later version! 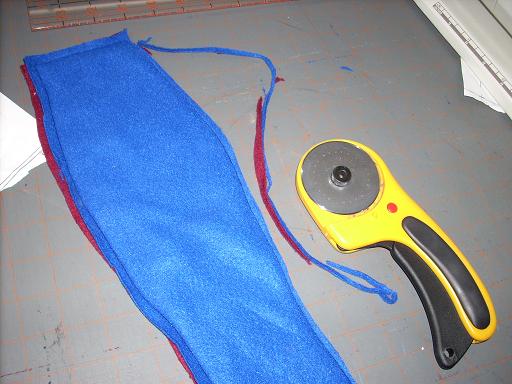 Getting close now. Let’s turn the piece rightside out!

I found it easiest to get it started, then to pull the turned piece through rather than try and push it through. 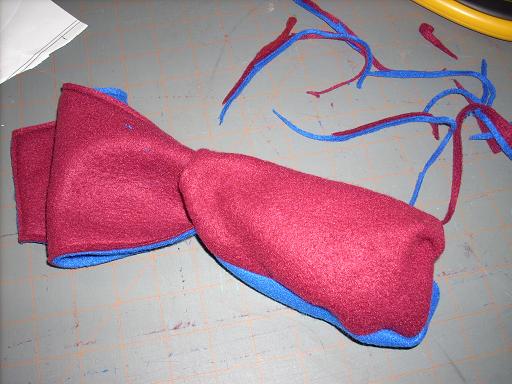 When you finish turning, it’ll look something like this!

A little too roly-poly, don’t you think?

Let’s finger press this flat. Work the seams and try to roll everything flat. You’ll probably have to work some of the seams to the edge of the piece.

We don’t want to use an iron to press this. Since it’s probably polyester fleece, ironing runs the risk of “melting” the fleece! 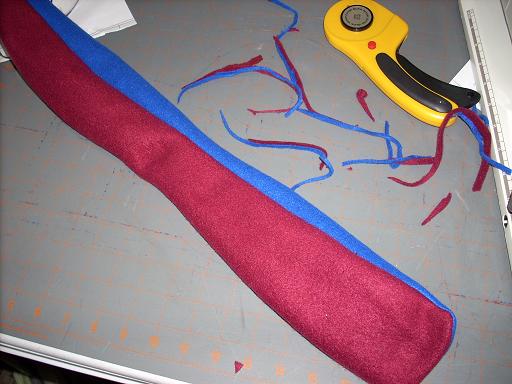 Here’s the roly sack after it’s been flattened! Starting to look a little like an ear warmer!

Actually, we could just join the two ends together right now and be finished. I found that if you did, though, you ran the risk of the colored sides “rolling” a bit. Instead of seeing a blue or a red front, you might see a blue/red front.

This might not be a problem — if you’re using school colors, you might actually prefer this! I decided to try and stop it from happening, though.

I decided to sew some “anti roll bar” lines along the width of the fleece (not the length, but the short width). 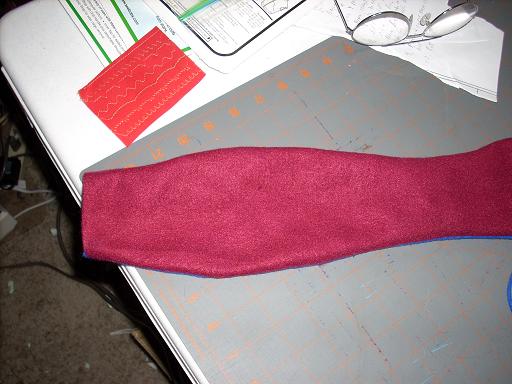 So, back to the Nova! I sewed a few lines across the band. I sewed one line on each end about 2 inches in from the end.

I didn’t want to sew a line in the middle of the band — because the middle portion will run across your forehead and be visible. 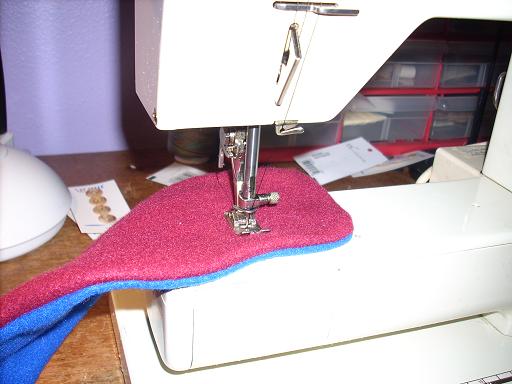 I also sewed a rollbar on either edge of the wide portion of the bowtie. After doing so, I decided to join them by sewing a “topstitch” along the edges of the curve.

This is about when I realized that a French seam would accomplish the same thing (defeat rolling) and might look better than the roll bars. Will have to give it a try. 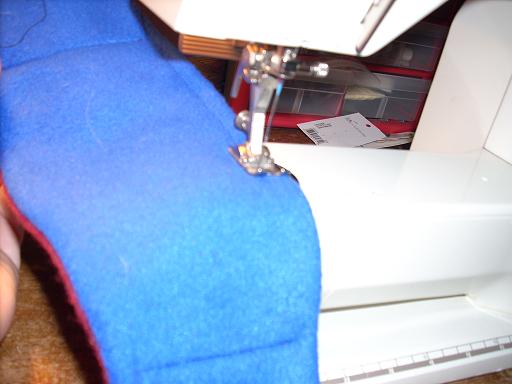 Just one thing left to do — join the two edges! There’s a bunch of ways you could do this — slipstitch by hand, roll one end in – hem – join, etc, but I decided just to slip the closed edge inside the open end and sew it shut. Not real pretty, but very quick and easy.

Next time, I might cover the join with a piece of ribbon. 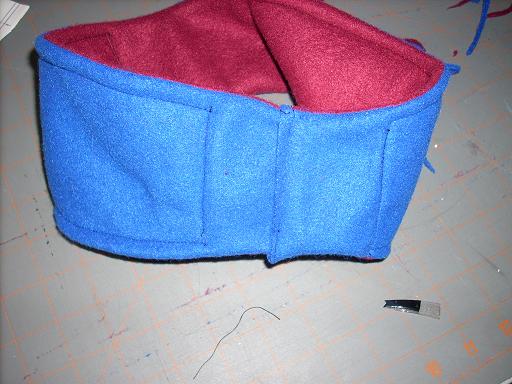 Here’s a side view of the stitching. You can see how the “topstitching” runs pretty much around the wide part of the ear warmer.

I kind of like this — maybe French seams wouldn’t add that much after all?

Even though it looks like you can see the stitching, all you’re really seeing is the “valley” created in the fleece when it was stitched. You can’t really see the color of the thread. 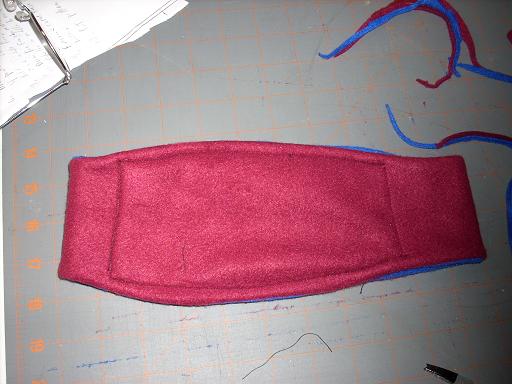 So how did the Bernina Nova rate? Hard to fault it — it did everything I asked, was lightweight, and so darned cute while it was doing it! I even started liking that chuffa-chuffa sound! I won’t use it for an everyday machine, but I’ll definitely use it as a portable. Same weight as a Singer 221, but more features and just as good looking!