Necchi Lydia and a Pillow Case with French Seams

Here’s my Necchi Lydia, Model 544. It was an Ebay find — I probably paid a little too much for it, but it came from a Sewing Machine Guy. Best packed machine I’ve ever seen.

Some Lydia models only do straight stitch — this one does zig zag as well as a number of ornamenting stitches. Plain old me … I tend to use the straight stitch all the time. Still, it’s nice to have the fancy stitches — they would actually go well along the hem and corners of a nice pillowcase, come to think of it.

I understand the Lydia does have at least one plastic gear — although the remainder are long-lasting metal.

I’m going to use this Pillowcases 101 project plan. It’s nicely done and uses French Seams to finish the sides. 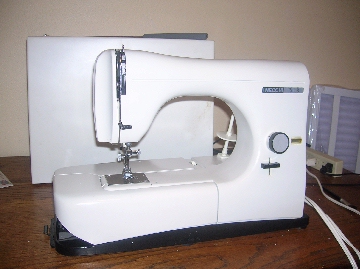 The Lydia is actually a free arm model. To expose the free arm, just pop the sliding arm case off. Grab the case and give it a quick tug to the left. There are no latches to unloose. Be careful, though, there is a door on the front of the arm case where you can store a few extra bobbins. This door may open inadvertantly when you pop the arm case loose. 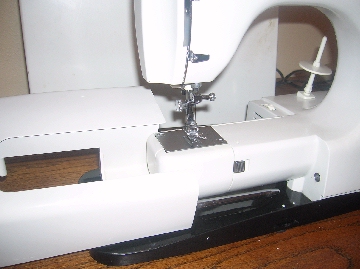 Here’s the free arm Lydia after the arm case has been removed. 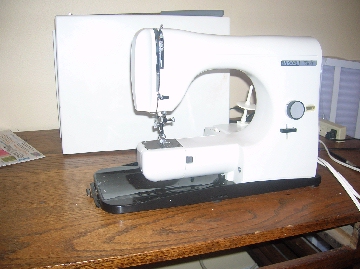 Note the little latch you exposed when you removed the arm case. This is the “hook shutter”. Press it to open up the shutter that exposes the bobbin and bobbin case. It looks like I’m going to press it with my finger, but I actually had to reposition and press it with my thumb — it’s a tight little latch. 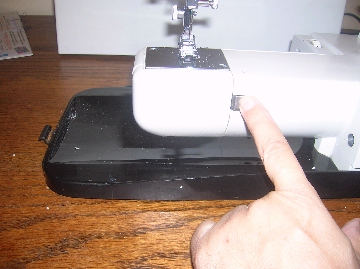 Once you’ve opened the shutter, you’ll see the bobbin and bobbin case. The case doesn’t actually cover the entire bobbin; the bobbin sits loose in the case. It’s kind of like a “bowl” that contains the shuttle. You can remove the bowl (bobbin case) by grabbing it and working it loose.

The first time I tried, I used a screwdriver to gently “pry” it loose. After a few times, though, I figured out the knack of easily popping it loose with my fingers.

Go ahead and pull the bobbin case — but don’t turn it upside down, or else you may … 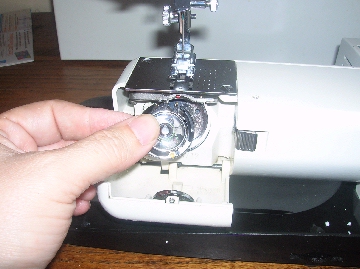 … lose the bobbin when it falls out! The manual tells you to remove the bobbin by turning the case upside down. Once you experiment, though, you’ll learn just to tip the case a little bit and the bobbin will fall free in a controlled manner. 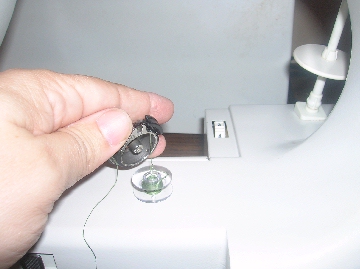 While you’ve got the bobbin case out, go ahead and unscrew the needle plate and clean out any lint you find in the area. I’ve seen many machines that look like there’s a square of felt under the feed dogs when you open it up!

This machine was amazingly clean — probably because it came from a Sewing Machine Guy. Here’s my “lint brush” — I use a soft makeup brush I bought at Ulta.

Put a drop of oil in the bobbin case “rack” while you’ve got things open. 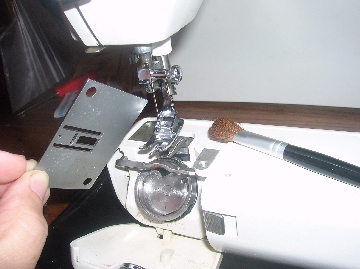 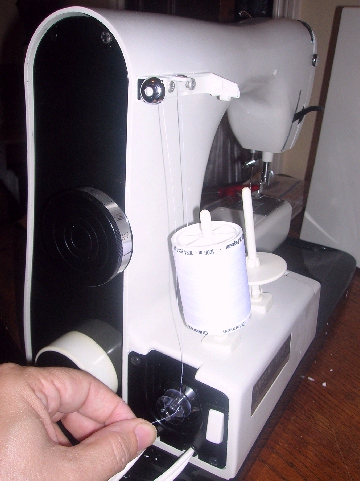 My machine was very sensitive to both upper and lower thread tension. In fact, I don’t think my upper tensioner is working all that well — I had to fiddle with it quite a bit before I quit getting bird’s nests on the bottom of the fabric! Even though this mess was on the bobbin side, it was caused by really loose upper thread. Once the tension was set, though, the stitching behaved quite well! 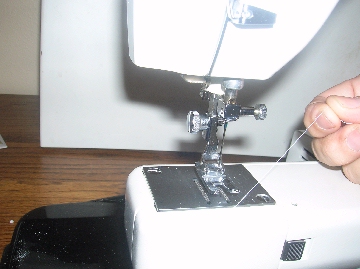 Let’s get started on the pillowcase. I’m following the instructions in the “Pillowcases 101” link given above. Of course, since I’m a complete moron, I messed them up and cut my fabric in half when I didn’t need to! Not a big problem, it just means I’ll have to sew the fabric together along three sides instead of along two sides. 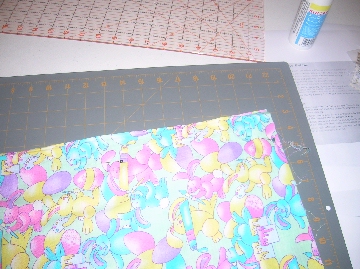 We’re going to use a French Seam. This means we’ll begin with the wrong sides of the fabric on the inside. Sew with about a 3/8″ seam allowance. If you didn’t mess up like me and cut your fabric in half, you’ll fold the wrong sides together and sew two other sides together (leaving one short side open for the pillow.

If’ve you’ve messed up and cut the fabric into two separate pieces, match wrong sides, pin together, and sew along three sides (again leaving one short side open for the pillow).

French Seams are simple and neat. Since you’re sewing wrong sides together, that means the right sides are visible when you start — giving you an idea of what your finished product will look like when you begin! Furthermore, you’ll have an enclosed and finished seam when you’re done. 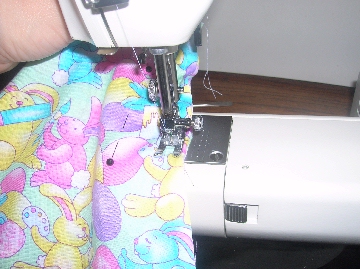 Once you’ve sewn around three sides, trim the seam to about 1/8″ seam allowance. Be careful not to trim into the seam thread. It doesn’t matter if your trim line is a little ragged — all this part will be enclosed once you finish the seam. 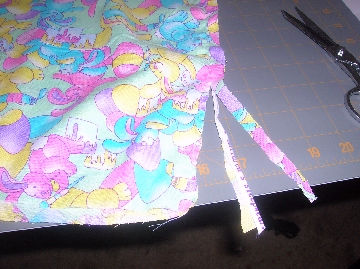 Okay — here’s where it becomes a French Seam. Turn the trimmed pillowcase inside out — the wrong sides are now on the outside. Press or pinch the edges together — pressing will give you perfect seams, pinching by hand will give you pretty close to perfect seams.

At this point, you have the wrong side on the outside and the sides are pressed together. The seam line you just sewed lies along the edge of the fabric “sandwich”. 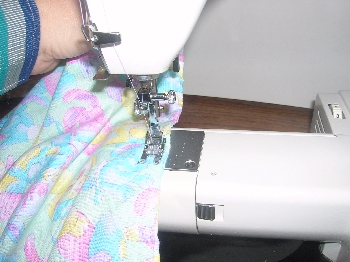 Think about the current configuration — the raw edge of the seam is now on the inside. Only about 1/8″ of an inch of seam is raw. So … if you now sew along this line — using about a 3/8″ seam allowance — you’ll enclose the raw seam.

When you turn the pillowcase rightside out, you’ll have enclosed seams on the inside — or French Seams!

Remember — we’re only sewing along 3 sides at this point (if you cut the fabric in half); or only along 2 sides (if you folded the fabric).

Note that even if you folded the fabric, if you really like the French Seam, you can sew along the folded side to create another French Seam — it just won’t have any raw edge inside to enclose. I’ve done this sometimes when a garment is a little too big and I want to make it smaller. 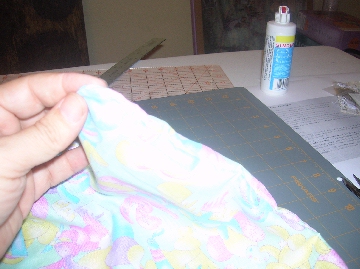 Turn the pillowcase rightside out and clip away any loose threads. If you’ve used enough seam allowance, the trimmed raw edges from your original seam are all enclosed in your French Seam. 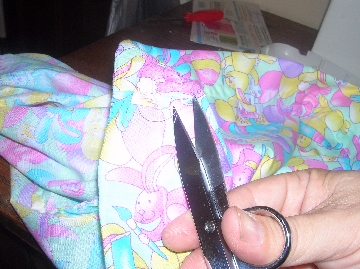 Here’s our finished seam. Note how clean it is! 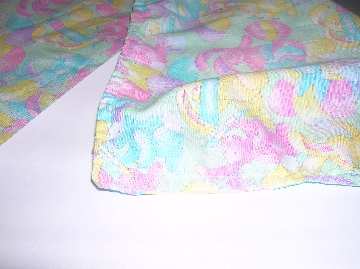 Here’s another view of the completed seam — I’ve stretched one of the sides so you can see how clean it is on the outside (and it’s just as clean on the inside! 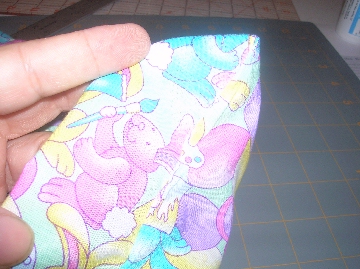 At this point, we have finished seams along three sides of the pillowcase — but we still have a raw edge on the open side!

We’re going to do a real simple hem right here. Turn the pillowcase inside out again — then fold over about 1/2 inch along the remaining raw edge. You can press this flat if you want to do it right — or just finger press.

I like to sew this 1/2 inch seam closed — although you don’t really have to. 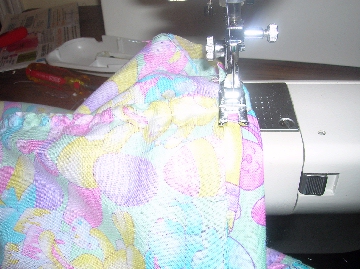 Now, fold in about a 2 or 3 inch hem. Again, press this flat if you want to do it right — or just eyeball and finger press. Sew another seam along this hem — you might want to use a short seam allowance (less than the 1/2 inch you previously pressed). 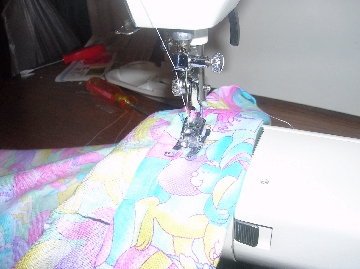 I then put a second seam row alongside this first row — I just think it looks a little nicer although it’s not at all necessary! 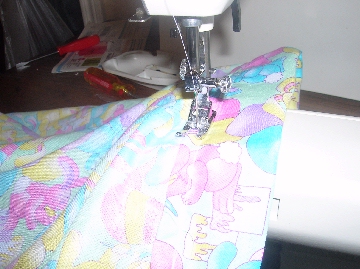 When you’re finished with this last row, turn the pillowcase rightside out again … and insert pillow!

Here’s the finished product — note that I only used a straight stitch during this entire project. We have completely finished and enclosed seams!

So how’d the Lydia do? Other than some tension issues that were particular to my own machine, things went very smoothly. I really like the easy to use bobbin — never had any problems with birds nests (after tension adjusted) or taking up the bottom thread. The entire bobbin process was very smooth — I like the open and easy to thread bobbin case.

Upper threading was smooth, presser foot action was as well. I can’t speak about different stitches because I didn’t use them — but they are available with a turn of the dial on this particular model Lydia. 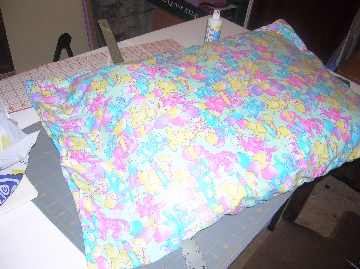