The Sidewinder by Wright is a simple and automatic bobbin winding device. It operates either with batteries or with an AC adapter (included in the box).

This guy is little and very lightweight. I really liked the idea of winding bobbins without having to get the sewing machine involved — I use a number of different vintage sewing machines and not all of them wind bobbins as good as others do. Introducing a “neutral third party” seemed an obvious solution! 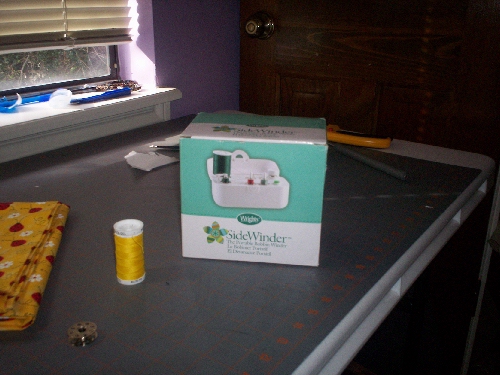 When you open the box, you’ll find the AC adapter, a cute little plastic box with a handle (the winder), and a short instruction sheet in several languages. Actually, the winder is pretty intuitive and you may not need the instructions at all.

The high plastic spool pin on the left is where you stick your spool of thread. You’ll route the thread around the tension knob on the right. The bobbin pin is on the front left. There’s a lever arm right next to it — when you attach the bobbin, you “cock” the lever so that it presses inside the bobbin. When the bobbin fills up, the lever will move and turn off the winder.

IMPORTANT NOTE!!!!Once you start the winder, the only way to turn it off is to have the cocking lever flip back outside the bobbin. Found this out the hard way.

The green button on the right front turns the winder on. The two pins in the front are for storing extra bobbins. 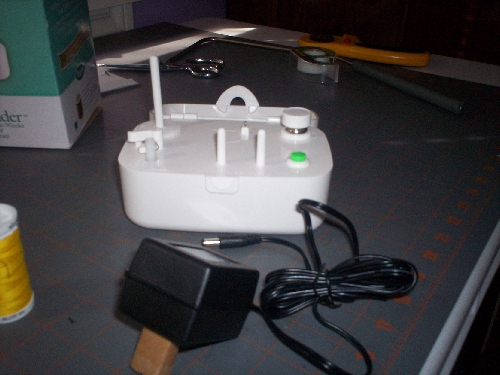 Here’s my winder all set up for winding a bobbin. I’ve got my thread running around the tension disk, then through the bobbin. I’m holding the loose tail of thread. I’ll let it go once the bobbin begins to wind.

I didn’t have to adjust the tension at all. However, I missed a little thread guide that ‘s directly between the thread spool and the tension knob. You can just see it in the picture. The thread should actually pass through this little loop guide before it hits the tension knob. It didn’t make any difference to my winding, although the thread seemed to jump up and down once winding began.

I was very surprised to find out how powerful the winding action was. It didn’t ramp up slowly; when I pushed the green button the bobbin began spinning at top speed. It surprised me and pulled the thread tail from my fingers. The thread spun out of the bobbin and the bobbin was spinning but not winding anything.

That’s when I found out pressing the green button again did not stop anything. I had to flick the stop lever with my finger to force the winder to stop so I could try again. 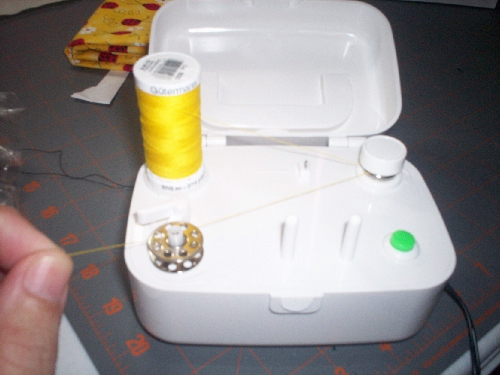 My excuse for losing the thread tail the first time was that it surprised me. I don’t have an excuse for the next two times when the same thing happened again … twice! That bobbin is really spinning fast and therefore pulling hard!

Anyway, the third time was the charm. I finally held on to the loose tail hard enough so that the bobbin could begin winding. I snapped a picture in mid-wind — my shutter speed was fast enough to freeze the bobbin image, but in real life it was moving like a fast blur.

Note the position of the stop lever — see how it’s not quite at a right angle to the front of the device? 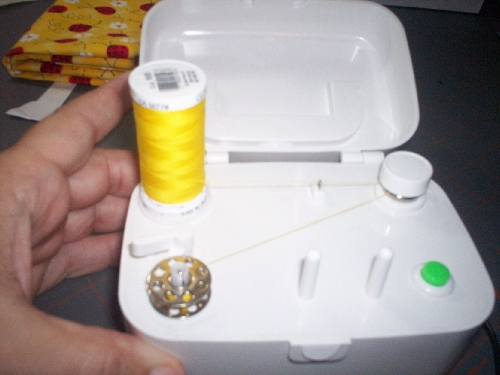 Here’s the finished and completely wound bobbin — the device stopped automatically when it filled up.

Note the position of the stop lever now — it’s at almost a right angle to the front of the device. When the bobbin filled, it tipped the lever to this position and shut things off.

At this point, you cut the thread and remove the bobbin (just pull it off the bobbin pin). 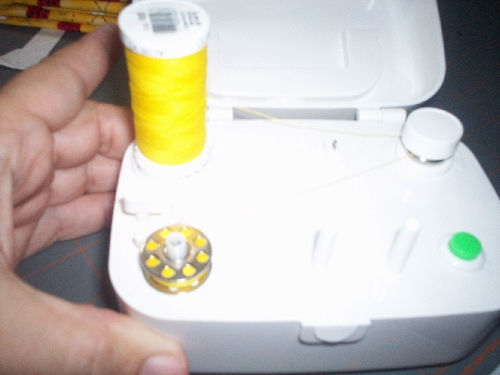 All done — so let’s close the lid! Cute little thing when it’s shut, isn’t it?

I keep the winder on a nearby shelf and pull it out when I need it. When I ever get organized enough to have my power strips set up right, I’ll just keep the AC adapter plugged in and ready to attach to my winder.

Is it a good deal or not? Well, even at list price it works for me. It’s worth $30 to not have to worry about winding bobbins. If you catch one on sale, then it’s really worth the cost!

Interested in finding your own Sidewinder? Press the Search button to see what’s available! 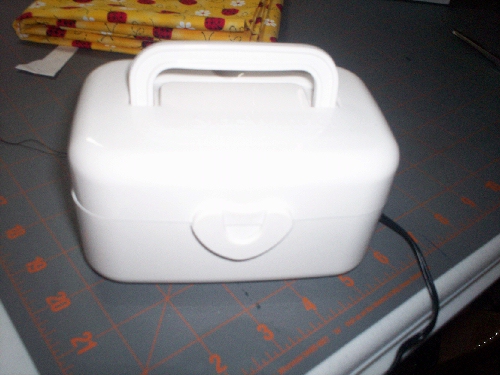