If you research the Singer 201, you’ll find more than one reference stating that the 201 is the finest sewing machine Singer ever made. While I can’t authoritatively say the same (I haven’t tried all the machines Singer ever made!), I haven’t found anything about the 201 that would make me disagree with that statement.

I really appreciate fine mechanical and electronic devices. I like old Hammond clocks and organs, tube amplifiers and vintage guitars, vintage sports cars, gizmos and gadgets like that. About 10 years ago (in a fit of mid-life crisis) I bought a Porsche 944. When I sit down at the Singer 201 and press the foot pedal, I get a very similar feeling to that experienced when cruising down the highway in the Porsche at a way-too-fast speed — the smooth and comfortable feeling of machinery performing perfectly.

This is kinda neat — I was just googling more stuff about the 201 — I see where one person compared it to driving a Ferrari! Maybe my Porsche analogy isn’t far off at all!

Singer produced at least four different versions of the 201: 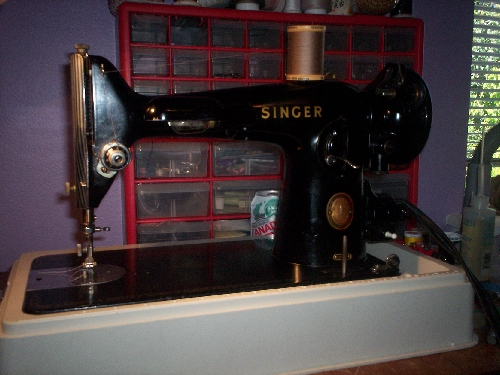 This particular model is a 201-2 You can see the motor “pot” on this backside view. It literally looks like a black pot hanging off the rear tower portion of the machine. The motor attaches to the drive mechanism via gears, not belts.

The 201 is a sturdy and heavy machine — not a portable at all! This is not a slim and sexy sports car — it’s a full-sized, classy and luxurious grand touring sedan! It’s built to last — but does need maintenance to perform its best. You’ll need to oil it regularly and also grease the gears from time to time. You can unscrew the circular silver plate on the backside of the machine to reveal the gears and the greasing points. Use regular Singer Sewing Machine gear grease (not oil!). Use sewing machine oil only at the recommended oiling points. 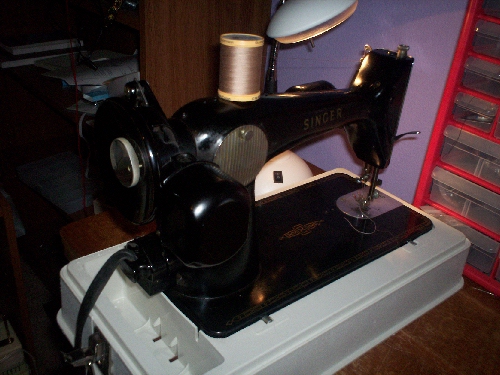 This is a Rotary Hook machine; it uses a Class 66 Bobbin. There is very little vibration when you sew with this machine — partially because of the rotary hook.

Threading is pretty simple — just follow the usual suspects. If you’ve never used a horizontal bobbin machine, you may have a little trouble threading the bobbin. Just follow the steps in the manual — or you can view this threading diagram.

Be sure and thread your needle from right to left — otherwise you’ll be skipping stitches! 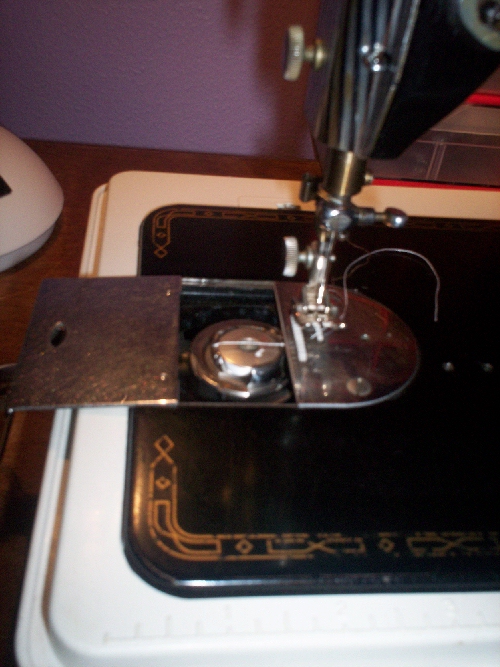 Being a straight-stitch only machine, the controls are sparse — but they’re all you need.

You have a standard stitch-length lever on the tower of the machine. There’s a thumbscrew driven set-screw to the left of the stitch lever. You can use this to adjust a sliding plate that locks in a maximum stitch length you can select — this helps you pop back to the same setting after you temporarily push the lever all the way up to lock in a reverse stitch.

Singer’s standard bobbin-winding works hang near the handwheel. I don’t use them anymore — I’ve been using my Wright Sidewinder to do all my bobbin-winding lately.

There’s an off-on switch (mine is a white toggle lever) near the bottom right-hand side of the tower. You also see an extra spool pin and a bobbin-winding guide. This lets you use a second spool of thread to wind the bobbin (so that you don’t have to unload the needle thread). The off-on switch also turns on the light. 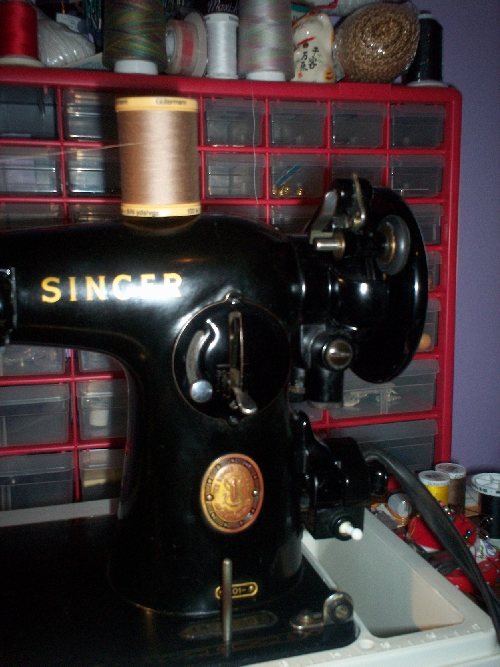 The 201 (like most old black Singers) is known for making a perfect straight stitch. I tried (and failed) to take a picture of the stitch, but I can’t focus close enough to show it. The wobbling line is my fault, not the machines! 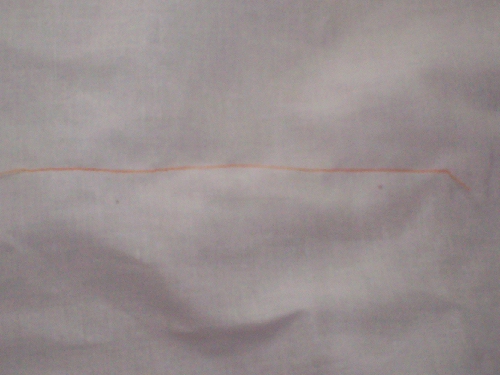 The first garment I made on this machine was a pair of capri pants for my wife. I like to find free patterns, but with JoAnn’s, Hancock’s, and Hobby-Lobby having 99 cent pattern sales every other week, it’s hard not to focus on some of those!

Here’s the very simple pattern I’m using. My wife picked out some tangerine-colored lightweight fabric for a summer pair of capris. This’ll be my first time doing a zipper! 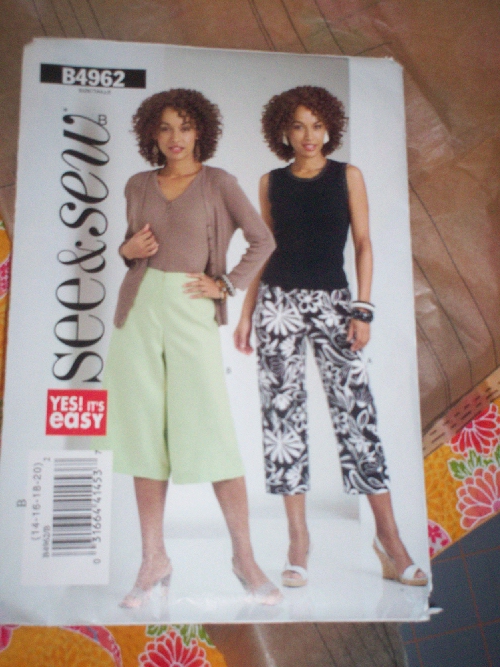 I ended out straying from the pattern a bit. I like to use French Seams to finish seams — so I thought I’d show the 201 doing them. First, I joined the wrong-sides of the fabric and sewed a straight seam about 1/4 to 3/8 inch from the edge of the fabric.

The edges aren’t joined perfectly — I pinned them together every six or eight inches, but every now and then one edge will stray a little bit. This won’t matter with the French Seams — as long as both pieces of fabric get sewed with the original straight seam. If your edges really don’t match, then you might want to try a 3/8 or even a 1/2 inch seam allowance. 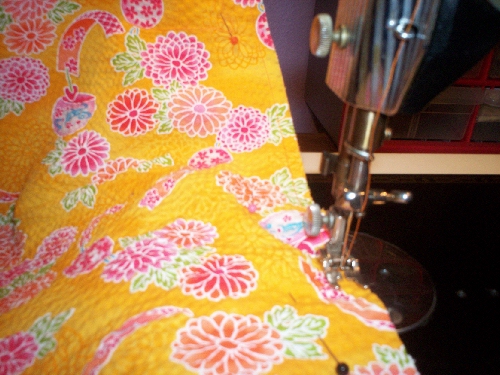 This’ll work — because after you finish the straight seam, you’re going to trim the allowance down to about 1/8 of an inch. If you’re very careful when you join the two pieces originally, you could actually sew the straight seam with a 1/8 inch allowance and skip this trimming part — but you may have to adjust the pattern since most of them allow for a 5/8 inch seam allowance.

Even though my original straight seam used a 1/4 inch seam allowance, I’ll end up using all 5/8’s before the dust settles.

These were fairly short edges (they’re capris, after all!), so I just used my scissors to do the trimming. If it’s a real long edge, I normally use a rotary cutter. 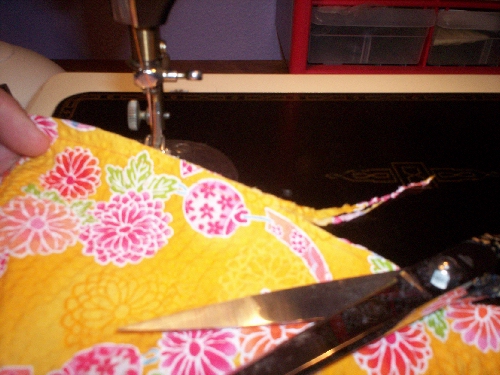 Once you’ve trimmed the seam allowance, then fold the fabric along the seam so that the wrong-side is now on the outside.

You now want to press the seam flat. I usually finger press — but if you use an iron you’ll end out with near-perfect French Seams. I’m usually not that picky, so finger-pressing works okay for me this time. Try and keep the pressed fold along the seam line.

Once you’ve done this, you’re ready to sew another straight seam about 1/4 of an inch inside the folded edge. 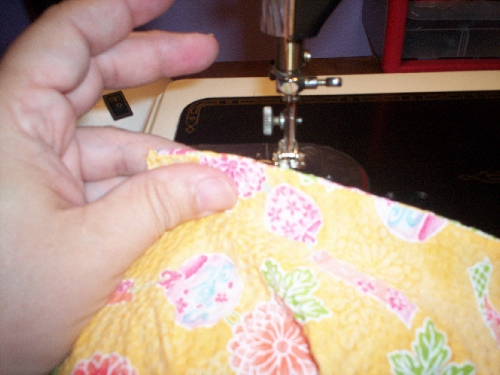 As you sew this seam, you end out enclosing the 1/8″ raw edge that’s folded to the inside. This finishes the French Seam. 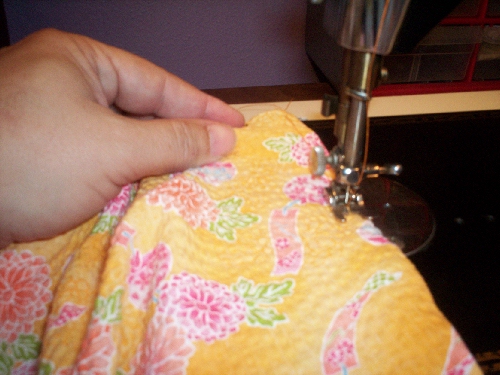 Here’s what my completed seams looked like — the french seams are along the sides of this pants leg. The garment is still wrong-side out, so you can see the enclosure. 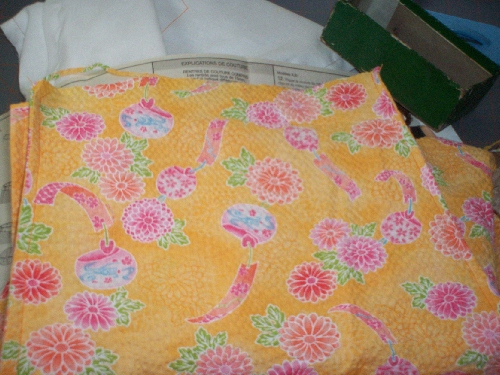 Once I unfold the fabric back right-side out, the folded portion of the French Seam is now hidden and I have some pretty darn good finished seams along the outsides of my pants legs!

My capri story unfortunately ends about here — I put the zipper in (was pretty easy with the zipper foot on the 201) and my wife tried the pants on. She looked at the bright fabric she had picked out and said “Hey, this makes my butt look big!” and changed her mind. I thought her butt looked fine, but what do I know!

Anyway, this brightly colored pair of capris (remember, she picked out the fabric originally!) has now become a wadder. I’ll make another stab using a darker piece of fabric later on!

My impressions of the 201? Well, I go back to the Porshce/Ferrari analogy. This machine purrs like the well-crafted piece of machinery it is. It feels quality, if you know what I mean. This machine will definitely be in the keeper list. 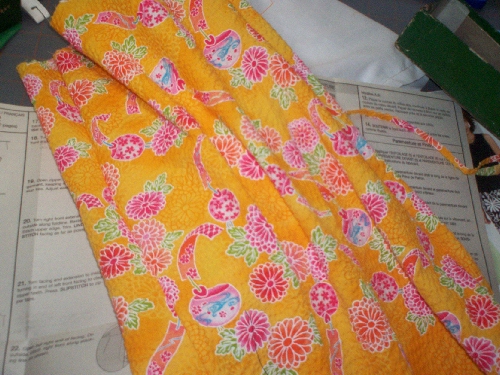