I admit it — I’m a sucker for old mechanical sewing machines. Love the feel of using something that’s been working for generations and will keep working for many more generations. There’s not many things you can say that about.

One downside of old mechanical machines is that they generally sew straight stitches only. Usually beautiful straight stitches, but still straight stitch only. Manufacturers like Singer enhanced the utility of their machines by offering add-on devices that supported new features — like zigzaggers, blindhemmers, and … buttonholers! (Yep, buttonholer IS a word!) Bazillions were made — so you can find them easily … especially on Ebay.

These gizmos aren’t for old machine users only — one thing you’ll find many sewist’s discussing is the quality of buttonholes their machines make. They’re normally not very happy with them! These old straight-stitch buttonhole attachments will likely work on more modern machines — and the quality of the buttonholes is pretty darn good.

We’re going to look at Singer’s Turquoise buttonholer — sometimes called a Jetson’s buttonholer because of the space-age appearance of the clamshell case. This buttonholer is meant for upright needle low-shank machines — like a 201 or a 221. This particular model will not work on Singer’s slant-needle series (like the 301, 401, and 500 series).

Let’s look at what’s inside. I’ve got the instruction manual, the buttonholer device itself, a feed dog cover, and five buttonhole templates.

You see two templates on each side of the case — they’re the little pewter-colored things. There’s a fifth template on the bottom of the case sticking out from underneath the buttonholer. Not how it looks like a slot with toothed edges?

Here’s a closer look at the templates. One of them is for a keyhole buttonhole, the rest are for differing lengths of straight buttonholes.

Note how they’re basically slots with toothed edges. A round metal gear is going to slip into this slot; it’ll rotate against the toothed edge. As it does, it “rides” the template to move the fabric all the way down, sideways, up, and sideways again. This is the path your buttonhole sewing is going to follow.

There are other templates — I have a Viking brand buttonholer that came with 13 templates! 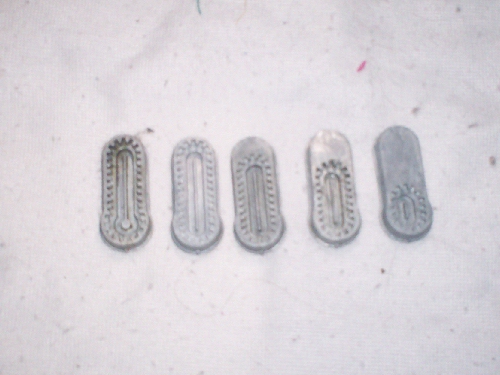 We’ll take a closer look at the buttonholer device itself. You’ll notice the knob sticking out the back — this isn’t actually a tightening type knob — instead, it’s used after the buttonholer is attached to your sewing machine to move along the button hole template you’re using.

You also see a sliding lever on the side of the machine. This lets you select the “width” of the buttonhole — basically how wide you want your “zig zags” to be. The device “clamps” on your fabric and moves the fabric from side to side to create the zigzags on a straight stitch only machine. Works better than you might think. The range goes from “N” (Narrow) to “W” (Wide).

On the back of the device, you see a small metal tab. This is actually a clamp that secures a door on the bottom of the machine. You release this tab to open the door in order to insert a buttonhole template. 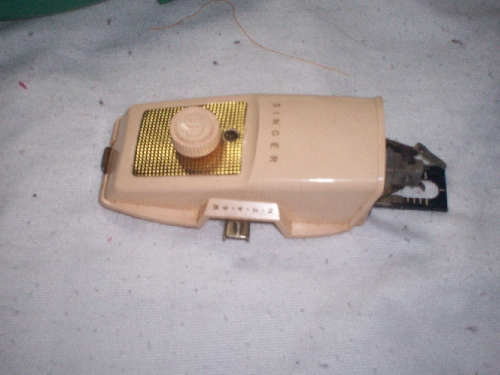 I’ve turned the buttonholer over and released the clamp to open it’s “tummy”. You see the rectangular open slot (with rounded edges) that’s revealed? This is where you insert the buttonhole template. Don’t worry about right way/wrong way — the template is slightly wider on one side than on the other, so the template can only fit one way.

Before you try to insert the template, note the round metal gear. This gear turns against the geared edges of the template to position the fabric. Right now, the gear is so close to the edge of the open slot that there’s not enough room for it to fit in the center of the template. 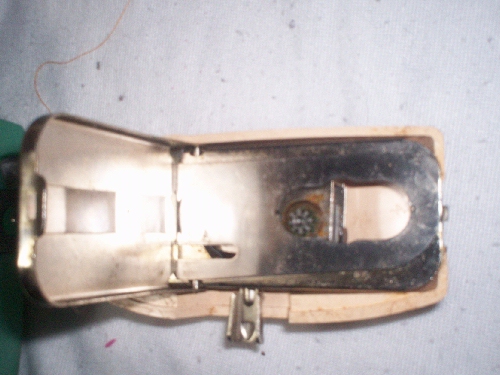 … just like this! The sliding portion of the tummy moves very easily from side to side — I had to push a tiny bit harder to make it move forward and backward.

Select a template, position it over the open slot so that the metal gear should slide into the open area between the geared edges, and press the template in place.

If one side of the template won’t fit in the open slot, move the template 180 degrees, then try again. You might have to wiggle things a tiny bit to make it fit. 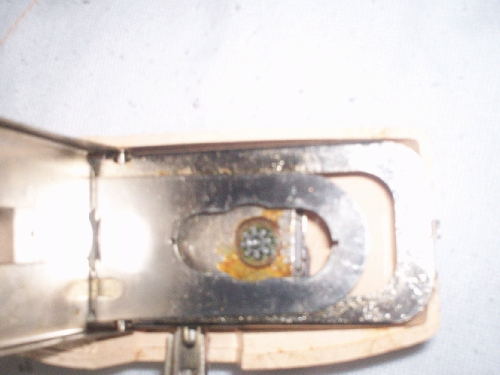 But you’ll eventually get it in. I just noticed the open arch shape on the back of the template. Perhaps this open arch should always go towards the center of the device? That would make things easier.

Close the tummy door, making sure the closing clamp latches.

Templates vary depending on the size of the buttonhole. If you’re using a small button hole template (like an eyelet buttonhole), you might have to work a little harder to get the metal gear centered in order to insert the template. However, once you get the hang of it, the templates pop in and out pretty readily. 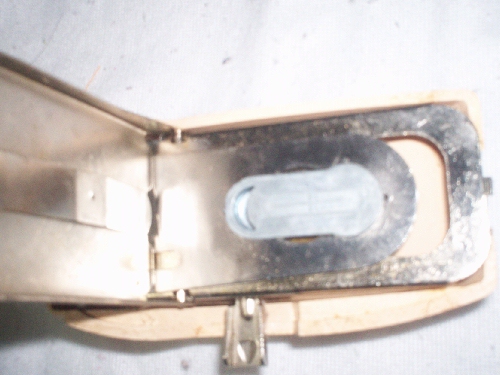 Time to attach the buttonholer! I’m going to use it on my Singer 201-2 — a straight stitch only machine made from the 1930’s to the 1950’s. The device will attach to the low shank needle bar just like a sewing foot … but first things first!

We don’t want the feed dogs driving things, so we need to cover them. The turquoise buttonholer comes with a feed dog cover. Attach it using the provided screws. I suppose you could just drop the feed dogs instead if your machine allows it — haven’t tried it.

If you do use the supplied feed dog cover, manually (and slowly) move the handwheel to make sure the needle will not strike the feed dog cover, but instead slips into the bobbin hole instead. 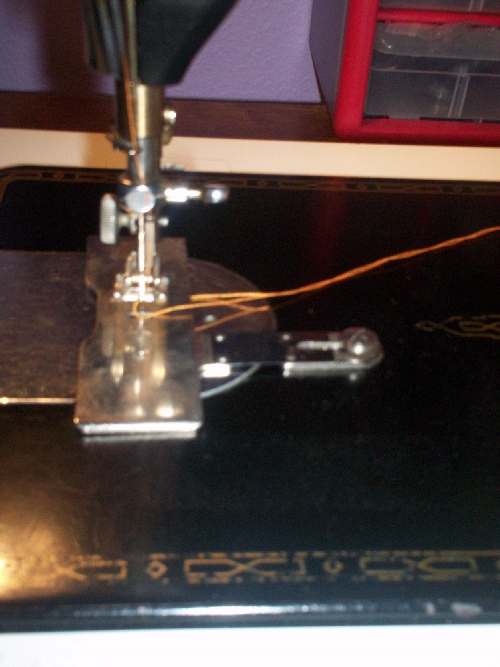 Let’s get ready to attach the device. Since it’s basically a sewing foot, we have to remove the existing foot to make ready. Raise the presser foot in order to do so. We’ll use the foot thumbscrew to attach the buttonholer.

I’m showing the device in front of the machine so you can see the lobster arm, but it actually attaches from the rear … 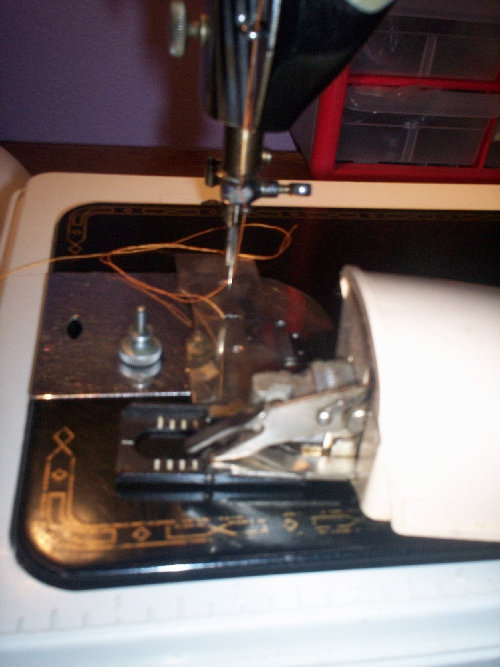 … just like this. If you look at the needle clamp screw, you can just see the two tines of the lobster arm on the top and the bottom of the clamp.

Go ahead and position your two thread tails just like you would for any other foot — between the foot and the sewing machine bed.

Now, we’ll position the buttonhole guide. This is the black ruled rectangle on the front of the device. We’ll use the knob on the back of the buttonholer to do this.

Rotate the knob clockwise. This turns the metal gear which in turn rides along the side of the template. As the gear rides the sides, the ruled rectangle moves backward (away from the sewist) and forward (towards the sewist).

My knob only worked when I turned it clockwise — it didn’t do anything counter-clockwise. I don’t think that’s broken on my buttonholer — I tried two different ones and they both worked the same.

Here, I’m turning the knob so that the ruled guide moves towards the sewist. 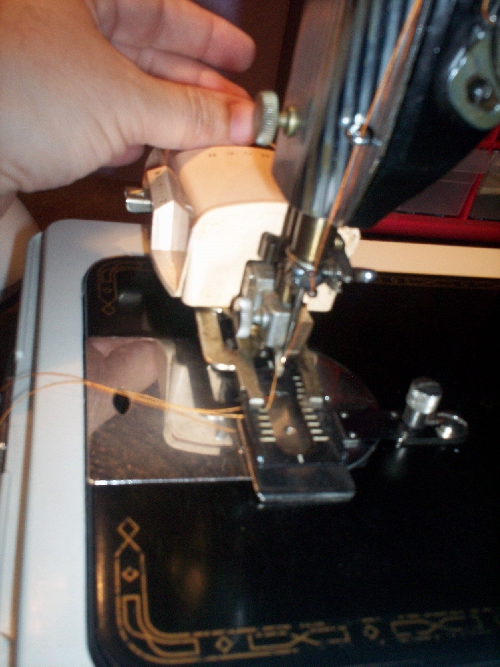 And here I’m moving it away from the sewist.

Obviously, the two extreme positions dictate where the “bar end” of the buttonhole will appear. Always start at one end or the other in order to make it easy to position your buttonholes just right. 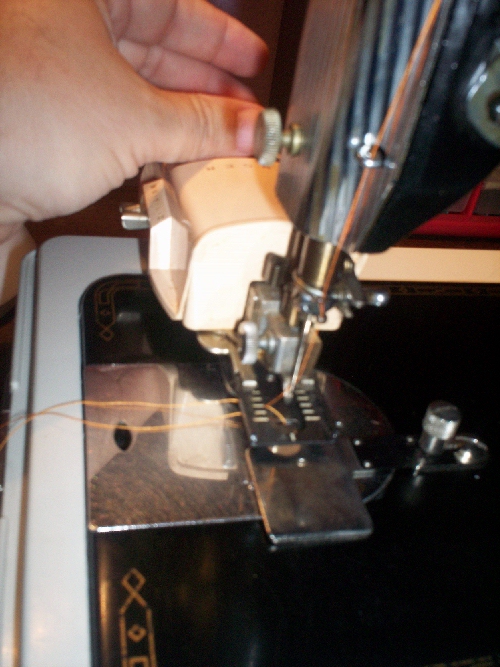 Position your fabric under the foot, then lower the presser foot. The pressure will “clamp” the foot against your fabric. As you sew your buttonhole, the device will slide the fabric back and forth so that you end out with a perfect buttonhole (with zigzagged edges)!

Press on the foot pedal to start sewing — there’s a lot of action going on, so slower is better than faster. I was able to sew pretty fast, but the quality of the button hole suffered.

There’s no need to set stitch length — remember, the feed dogs are covered! The buttonholer automatically feeds an optimum stitch length (although it appears that sewing at a faster speed increased the stitch length). 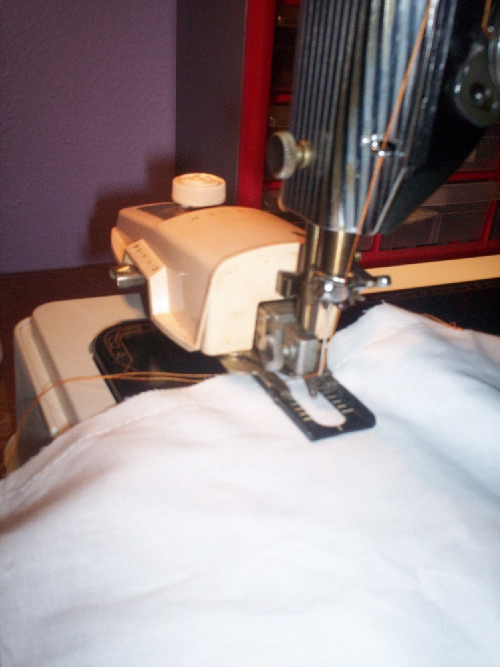 I was pretty pleased with my orange buttonholes — they’re nice and thick along the edges, just like I like ’em.

Partway through, my bobbin ran out — rather than load more orange thread, I switched both threads to a black thread (figured it would show better in the pictures). I learned something when I did so!

My black buttonholes didn’t look as good as my orange ones! I think there were two reasons why.

First, I sewed a little faster … well, okay, a lot faster … when I was using the black thread. I think this led to some inconsistency in the stich length. Also, remember that the buttonholer device is rocking back and forth and side to side, sliding the fabric along for the ride. I think the faster speed also led to some inconsistencies here — which is why I think the black button hole sides aren’t always straight.

Second, my black thread was a lot thinner than my orange thread. I think this led to the buttonhole sides not being as thick as I like them to be. I could have used buttonhole cording or dental floss, but I believe I’ll just be careful and use thicker thread when I do buttonholes.

You can see the difference between the orange button hole and the black ones. The orange ones are much straighter and thicker. Sew slow — and use thick thread!

All in all, I’m pretty pleased with the buttonholer. The nature of it’s use means that I can easily position my buttonholes so that they’re evenly placed. Also, the templates mean every buttonhole will be the exact same size — something I can’t guarantee on more modern four-step button hole machines.

It’s not until you get to computerized sewing machines before you can achieve same-size buttonholes again … although it was originally available on simple mechanical machine decades ago!

It’s not a bad idea to have one of these sorts of buttonholers in your trick pile — they’re pretty cheap on Ebay ($5 to $10). Look for ones that contain all the templates … instruction books are nice, but every one I’ve tried has worked the same way (don’t forget how to do the lobster claw!).