Well, here was the plan: I wanted to find a neat placemat and use it as the basis for a tote bag. Summer’s coming up — that means weekend and beach trips, so a couple of extra tote bags are always handy.

What I planned to do was find a nice fabric placemat with a neat pattern, fold it in half, sew up the sides, then attach handles to make a tote bag. What actually happened is that I could never find the right placemat! For a few months, every time I entered a linens type store, I checked out the placemats. Bought a few, but none were ever just right.

Until, that is, I was going through a clearance sale at “Bed, Bath, and Beyond” and found two perfect fabric placemats! Nice, smooth fabric; neat patterns. I got both of them, showed my wife and told her my plans to make tote bags using these placemats.

“Good idea,” she responded, “… except those aren’t placemats; they’re dishtowels!”

“No way” — and then I looked at them a little longer … and darned if they weren’t dishtowels! So … my placemat totebag became a dishtowel totebag. Same plan — except the dimensions of the dishtowel actually work out a little better. 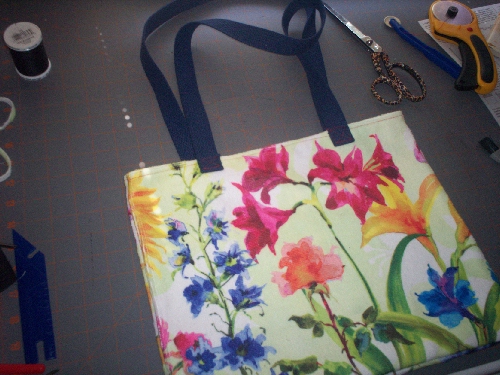 So, here’s where I began. I’ve taken the towel and folded it in half. You can see the tag and the soft terry-like underside that’s the giveaway that this is a dishtowel — at least, to anyone except me!

I folded the towel right across the middle, then brought the sides up together to form the body of my tote bag. I was pretty pleased with the plan, because the dishtowel has finished edges. All I was going to have to do is fold it and sew up the sides — and then realized something!

My pattern was upside down! This folded towel would work fine, but would look silly — at least, to me it would!

Darn — damage control time and change of plans. Rather than leave the bottom of the bag folded, I decided to cut the towel in half. That way I could sew across the “new” bottom of the bag so the pattern would be upright.

The only problem was that I was now going to have to finish the seam at the bottom of the bag. Not a big deal, but it will end out making the tote bag a little smaller than I had originally planned. 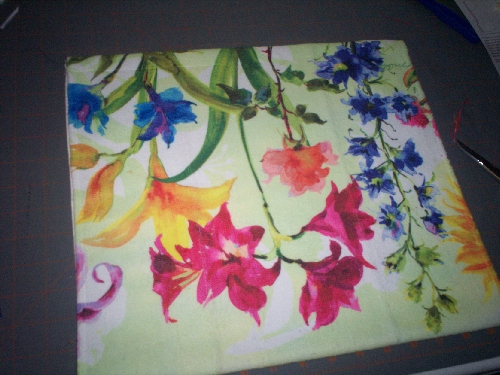 Here, I’ve cut along the folded line with a rotary cutter. Wastes a tiny bit of fabric, but I’m more assured of having matching sides when I do it this way. 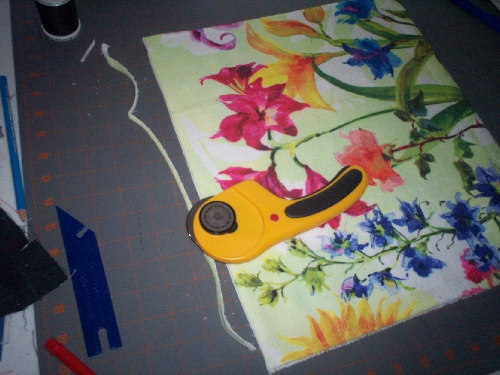 After cutting the towel in half and matching up the sides, here’s the orientation I’m looking for — the flowers are now upright!

I’ll have to sew along the sides of the bag and along the bottom of the bag (at the base of the flowers) to make the bag. I’ll also have to finish the cut portion of the seam. 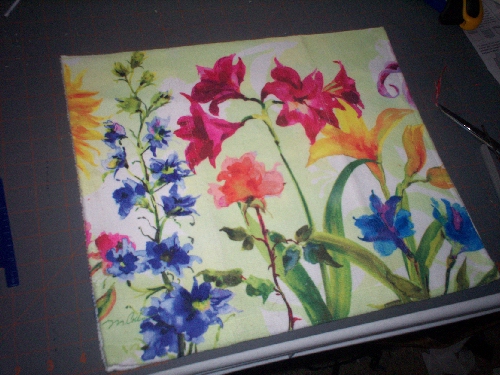 So I get to try out the Pfaff 1035 — I start doing a simple roll-under hem along the cut edge of the towel sides.

I’ve never sewed terrycloth before — and this is a very thin terry — so I wasn’t sure how the foot pressure should be adjusted. It turned out it worked fine using the normal foot pressure, so no adjustments were necessary.

The Pfaff had no problems — I also noticed that the loose thread ends didn’t pull away from me when I began the seam. On some machines, I have to hold these rather tightly or else they’ll yank away. I hardly had to hold them on the 1035 (in fact, I didn’t hold them at times) and everything worked fine.

I’m not doing any fancy stitching, just straight stitching with a stitch length of 2.

By the way, this hemmed portion will end out being the “top” of the tote bag because of the orientation switch, so I wanted a nice looking hem. 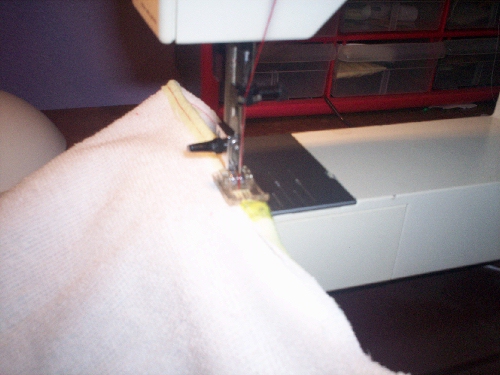 After double-roll hemming both cut edges, this is what I ended up with. I used the red thread because I wanted something to contrast against the mainly white background (makes better pictures) — plus I was matching the red flowers. 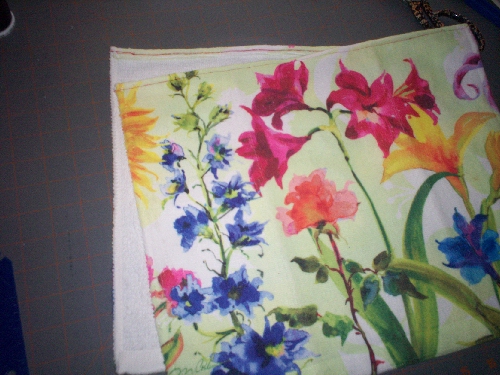 Time to join the sides together (which I wouldn’t have had to do IF my pattern had been okay from the beginning!).

I decided to match right sides together — that will leave all my seams on the inside of the bag once I invert it. Remember, all the edges on the towel are already finished so I don’t have to worry about them! (well, except for the edge I cut … but I already hemmed it)

I was kind of curious how the Pfaff would do when it got to the finished edges of the towel. These edges were pretty thick and stiff from the manufacturer’s finishing process. Ended out not being an issue — the Pfaff plowed right through them. At time, the foot tilted at a decent angle as it fed the thicker pieces of towel. I’ve had to watch this closely on other machines (even have to use shims every now and then), but the Pfaff handled it in stride. 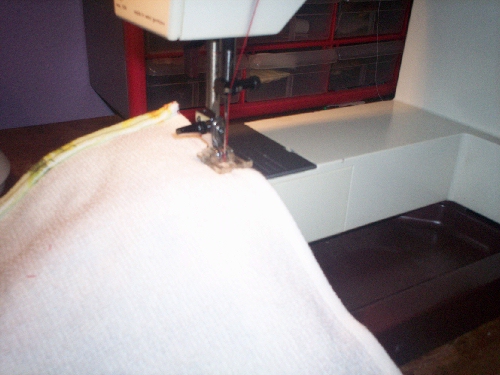 I’m sewing across three edges — side, bottom, side. When I get to the corners, I want to stop with the needle down. Turns out all you need to do is tap the foot pedal and the needle will go to the down position.

The needle normally stops in the up position — a tap puts it in the down position.

After stopping at the corner, I lift the foot and rotate the towel 90 degrees to position it to sew along the next side.

You can see I’m using a rather wide side seam allowance here. This is the “bottom” of the bag — which was originally the “sides” of the towel. They have fairly thick finished edges. I didn’t want to have the seam running through these edges because they won’t fold as well as the rest of the towel (being so thick and stiff). I decided to give up a little bit of size in return for consistent “folding”. 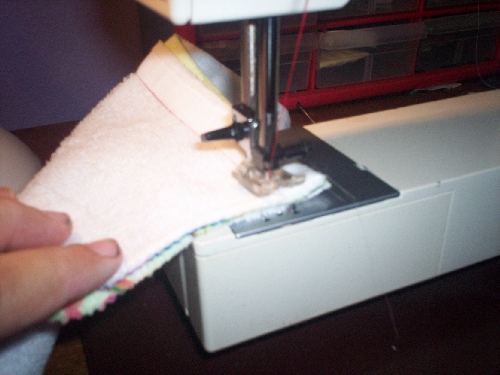 And here’s the bag, right-sides matched with seams along the sides and bottom.

It looks like there’s a seam along the top, but that’s actually the rolled hem I did at first. The bag is open at the top, but joined along the sides and bottom. 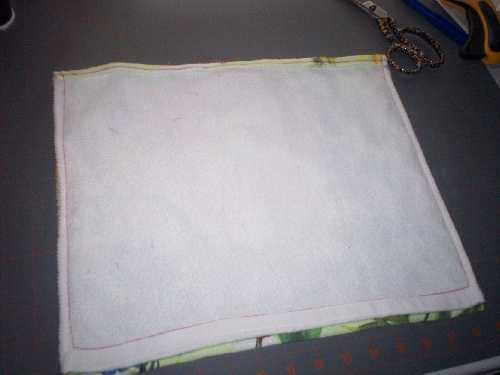 Time to flip it — invert it from inside-out to outside-in … and here’s the completed bag portion.

Because I had to cut it (because of the pattern) and leave the edges on the inside, the dimensions are slightly smaller than I had originally planned. It’s still a good tote bag size, though!

All that’s left is to attach the handles. 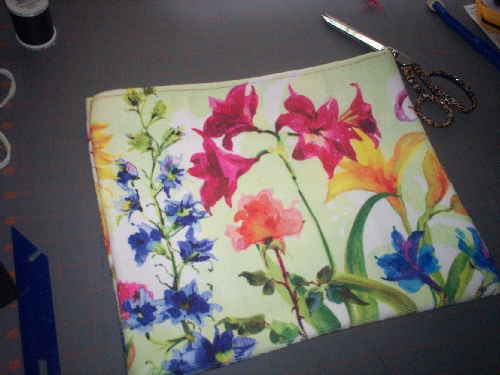 I’m using some 1 inch wide canvas webbing strips. I already had a single piece about 64″ inches long. I cut it in half to make two 32″ pieces. These will be my two handles.

This length will actually work pretty good — we’ll be able to hang the bag from our shoulders and have the bag lie against our waists (we’re both on the short side). 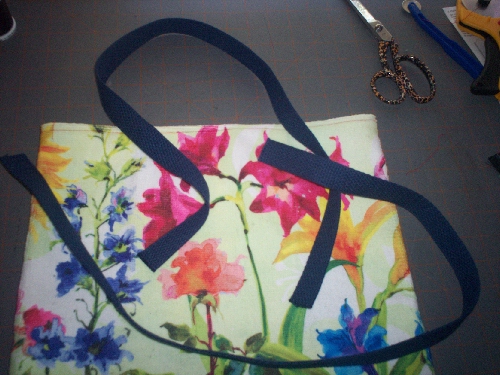 I start by pinning one end of a strap to the “top” of the bag about three inches in from the side. Three inches just looked about right, I didn’t use a formula or anything.

I made sure I had the bag open so that I was only sewing against one side! I sewed along the edge of the strap, rotated at the corner (thanks, needle down thing!), sewed for about the length of the presser foot, rotated, sewed back to the other edge, rotated, then sewed back to the starting point.

I want to make the strap attachment strong — and I want to distribute the weight so that it doesn’t tear out. 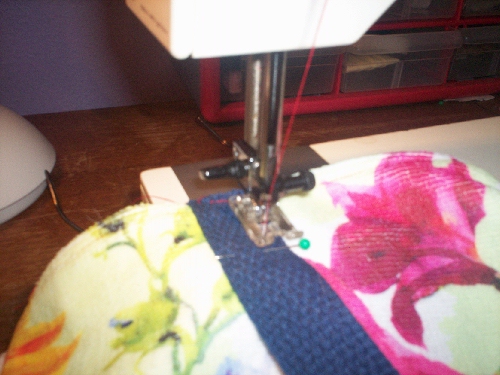 I ended out sewing a “square” to attach the strap. This should be pretty strong and the four sides will distribute the weight load … but notice that the strap is hanging towards the bottom of the bag, not towards the open end at the top!

That’s because my next step is to fold the strap back towards the top … and I’ll then sew another attaching seam to provide even more strength! 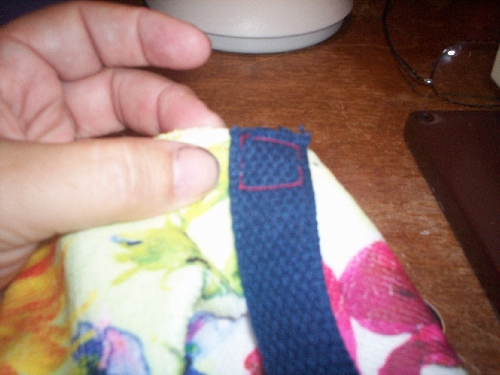 Here’s the fold — pointing the strap back in the right direction. 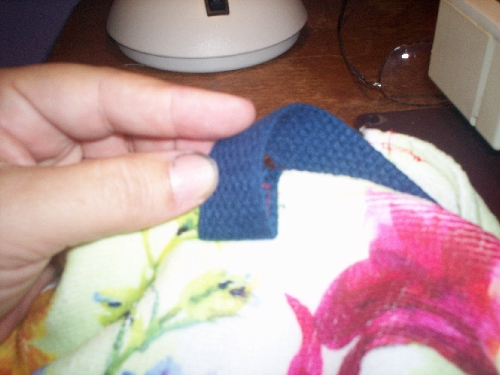 Once I’ve folded the strap, the plan is pretty much the same. I’m going to start at the corner and sew a “square” on the strap.

At the thickest part, I’m going through two layers of heavy canvas webbing and three layers from the double-folded hem. Had no issues at all. 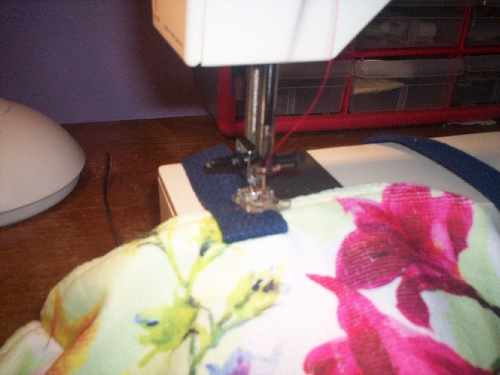 The end result is a square with an “X” in the middle. This distributes the weight and provides beaucoup strength. I’ve sewed along the “bottom” of the strap three times, so it’s pretty secure. Plus, my final line across the top of the folded strap enclosed the cut strap edge, so even the strap has a finished seam! 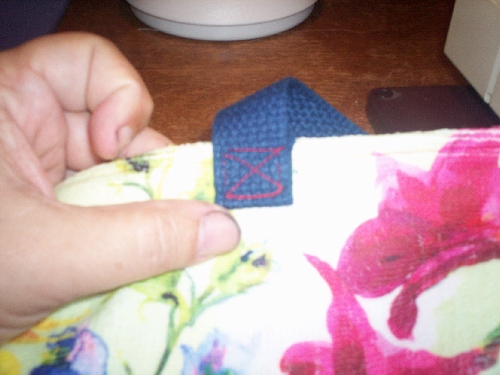 Almost done — do the same thing for the other three ends of the straps. Be careful and make sure you don’t place a twist in the strap when you attach both sides. You might also want to make sure both straps fold in the appropriate direction.

You can see how the longish straps work — these bags will sit just right when tossed over a shoulder.

By the way, I had mentioned I purchased two placemats (that were really dishtowels). It turned out that the pattern on the second one didn’t have a top or a bottom … so I could use my original scheme. Looks like this … 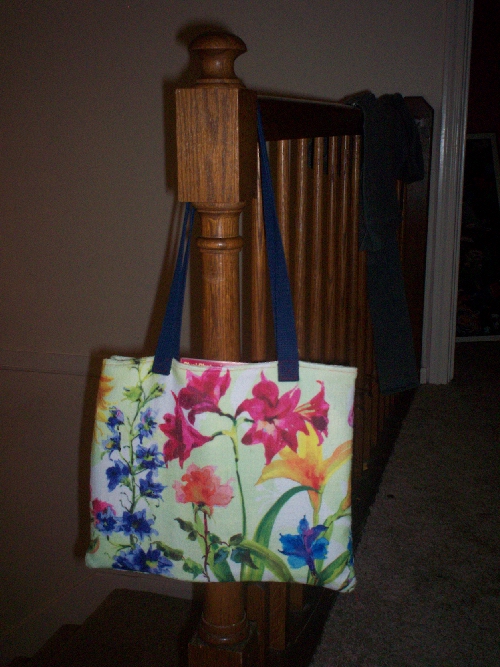 I just folded in half, sewed up the two sides, and attached straps. Didn’t even do the “match rigthside and invert” thing, just folded wrong sides together and sewed along the sides. Because of all this, this bag is a little bit larger than my first one. I made the straps a tiny bit shorter because of this — used 30″ inch long straps rather than 32″ long ones.

Finally feelings on the Pfaff Tipmatic 1035 — I’m very pleased (especially considering the price I got at the thrift store!). No grumbling or griping, no issues with tension or foot pressure, loved the needle down tap thing. I didn’t use any fancy stitches, but the zigs and zags worked fine on test pieces. You can combine stitch settings to get things like scallops and such. Controls are all right where you want them and easy to reach (German design) and the plug on the bag is done very well.

This isn’t a bottom of the line — nor is it a top of the line — but is a well made competent tool. If you see one for a good price (and they tend to be high on Ebay), you might consider adding it to your bag of tricks! 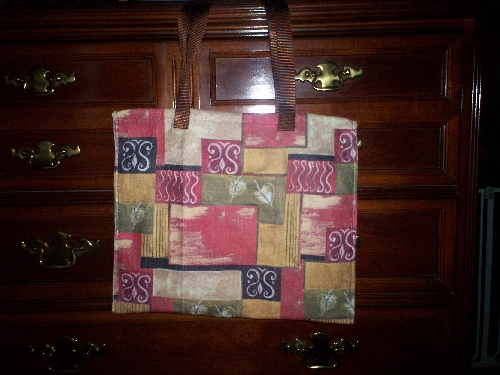