From what I understand, the Viking 150E has a curious history. It was a Consumer Reports Best Buy — and had high customer demand — before it ever existed!

But — here’s the bad news … at this point, Husqvarna had already replaced the 150 with the 610. The 610 looked pretty much the same as the 150, but it was a better machine with improved electronic control.

What’s Viking to do? The 150 model no longer existed — but people want to buy it because of the Consumer Reports recommendation! The solution — the 610 fades away and the new 150E (for electronic) re-appears from 1989 through 1992! Husqvarna basically took the 610 and relabeled it as the 150e. 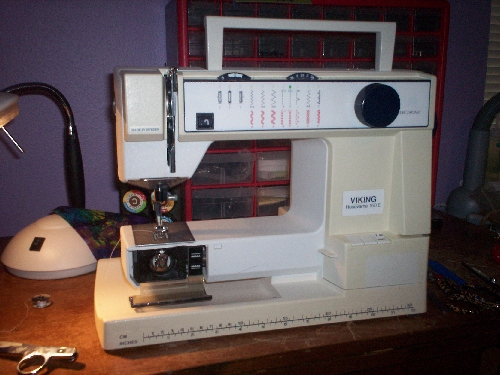 What’s the electronic part mean to us? Well, as far as I can tell, it means the foot control pedal is much more responsive — it doesn’t use a mechanical rheostat, but instead uses electronic components that respond more accurately. Kind of like the difference between the old mechanical radio tuners and newer electronic tuners. They do the same thing — the electronic mechanism is just more accurate and precise.

Unfortunately, this also means the old 1xx foot pedals will NOT work with the 150e. Here’s a close up of the plug socket — it’s hard to tell, but one side of the socket has a rubber “+” and the other side has a rubber curve. This means only an electronic foot pedal will fit. The 150e uses the same foot pedal as the 105, 185 and 190 (I think the 180 is the older rheostat control — don’t know this for sure, but I believe it’s the case)

If you try to buy a replacement foot control, you’ll find them listed starting at $150 or so! Solution? Buy a Classica 105 from Ebay — they often go for $20 or less. Ask the seller to send you only the foot control — if you’re lucky, they will. If not, you pay postage for the lightweight 105 and you get the foot control anyway. Either way, you’ll come out way better than the list price for the foot control.

Note the bobbin winder above the socket — it works much the same as earlier Viking bobbin winders. You use the needle thread, run it under the foot, across the front, and around the right hand side to meet the winder. The winder does not automatically stop when the bobbin is full.

Also, the 2000 series bobbins will not work with the 150e. You need the plastic bobbins that have a small concavity on one side. 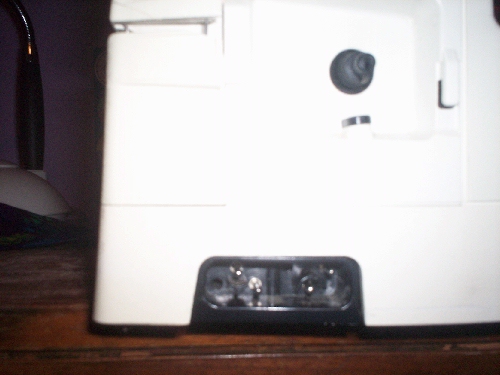 The 150e doesn’t have a real wide range of stitches (it has 17 stitches including a four-step buttonhole) — you use the large black dial on the front right side to select stiches. When you select a stitch, a recommended stitch length appears in a window.

My “straight-on” shots of the stitches all washed out — here’s a shot at an angle that shows the stitches. Mainly the standards — straight (with two needle positions), varying width zig-zag, three-step zig-zag, blindstitch, overlock, plus an extra set of variations of reinforced or embellishment stitches (They’re the orange stitches). 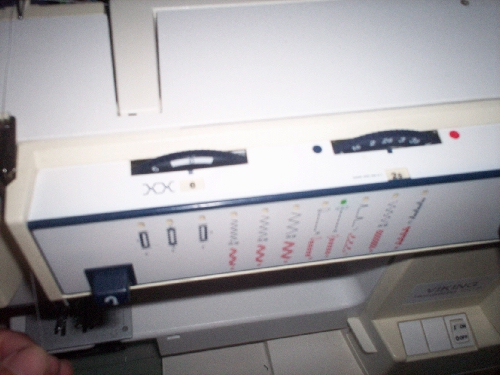 Threading’s pretty simple — place a spool of thread on the spindle, then guide the thread across the back, then pull it up and against the rear thread guide to pull the thread to the front of the machine.

The thread guides all have “slots” so that you don’t have to actually feed the thread through the hole — just pull it across the slot and it will slip into the guide hole. I really like this feature! 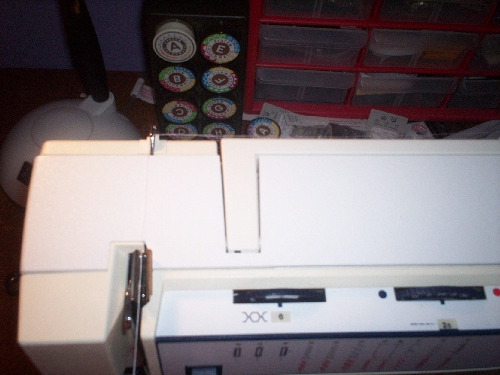 Pull the thread down through the tension plates along the right side of the front thread guide (with a take-up spring). 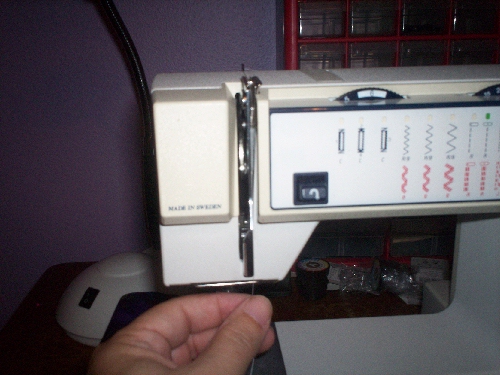 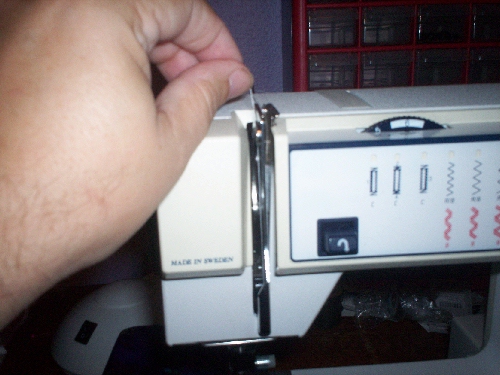 … just like this! Pull the thread down the front.

There’s a metal bar at the bottom of the left-hand side of the machine head; pull the thread over this bar, don’t try to insert the thread underneath the bar. 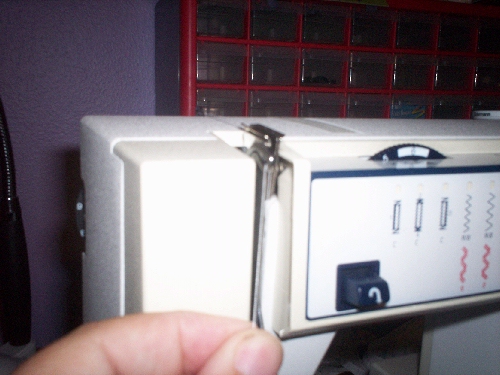 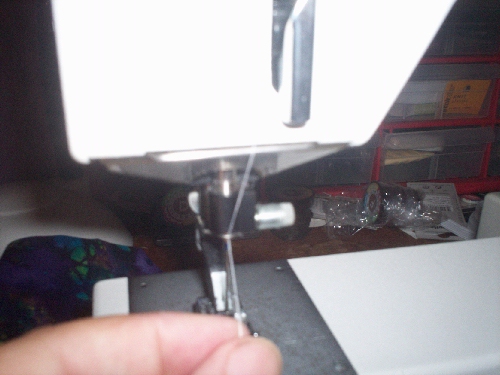 The bobbin works as creamy dreamy as all other Viking bobbin mechanisms. Smooth as silk, no tangle, works every single time. Always. No rats nests — ever!

That’s one of the biggest Viking selling points to me — nothing gets me more frustated than bobbin woes. I simply never have them with my Vikings. Never! 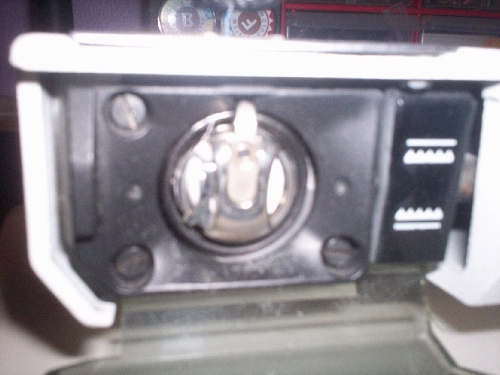 Here’s a final peak at the stitches. Smooth and easy — nothing fancy, but it’s accurate and reliable.

So, why look at a nearly 20 year old machine? First — you can find them pretty cheap … sometimes $50 on Ebay! They’re quality products from a known and proven manufacturer, they’re reliable and work great, parts are plentiful, they’re lighter than the 2000 series (easier to bring them to a class), and they’re pretty cheap. Didn’t I say that already?

Means you’ll get much more for your money than if you bought a brand new Asian toy quality sewing machine at Walmart. Heck, you could spend two or three times as much on a new machine and it still won’t be as good a machine as an older 150e (or any of the 1xx line, for that matter). They really deserved their Consumer Reports plaudits! 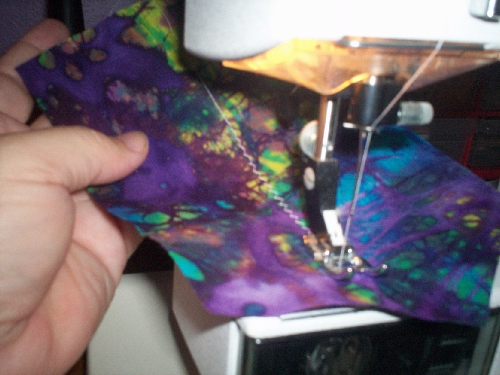